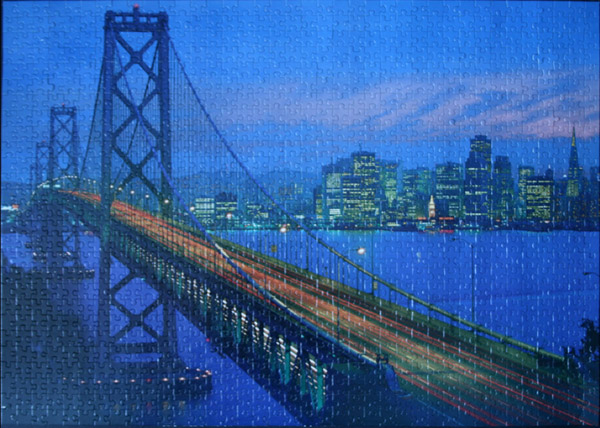 Size: 1000 pieces
Notes: The San Francisco – Oakland Bay Bridge (known locally as the Bay Bridge) is a pair of bridges spanning San Francisco Bay of California, in the United States. Forming part of Interstate 80 and of the direct road route between San Francisco and Oakland, it carries approximately 270,000 vehicles per day on its two decks. It has one of the longest spans in the world.

The toll bridge was conceived as early as the gold rush days, but construction did not begin until 1933. Designed by Charles H. Purcell, and built by American Bridge Company, it opened for traffic on November 12, 1936, six months before the Golden Gate Bridge. It originally carried automobile traffic on its upper deck, and trucks and trains on the lower, but after the closure of the Key System, the lower deck was converted to road traffic as well. [Wiki]

I do not have a record of the producer of the puzzle as I do not have the box anymore. A clarification is welcome – if you have any clue as to the details regarding this puzzle, I would much appreciate that information.