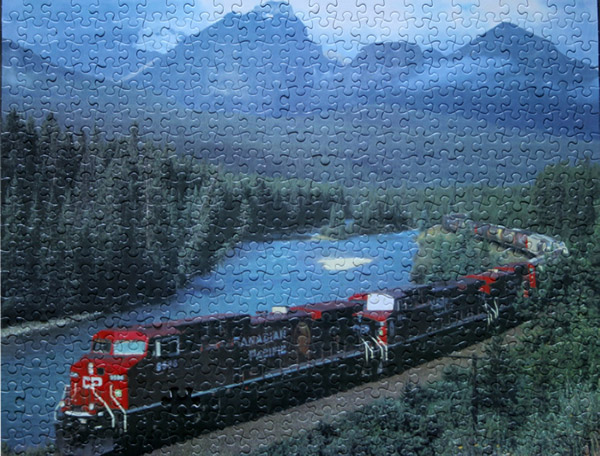 Size: 500 pieces, 1 missing
Dimensions: 45cm x 35cm
Producer: Leap Year
Notes: The railway was originally built between eastern Canada and British Columbia between 1881 and 1885, (connecting with Ottawa Valley and Georgian Bay area lines built earlier), fulfilling a promise extended to British Columbia when it entered Confederation in 1871. It was Canada’s first transcontinental railway, but currently does not reach the Atlantic coast. Primarily a freight railway, the CPR was for decades the only practical means of long-distance passenger transport in most regions of Canada, and was instrumental in the settlement and development of Western Canada. The CP became one of the largest and most powerful companies in Canada, a position it held as late as 1975. Its primary passenger services were eliminated in 1986, after being assumed by Via Rail Canada in 1978. A beaver was chosen as the railway’s logo because it is one of the national symbols of Canada and represents the hardworking character of the company. The object of both praise and condemnation for over 120 years, the CPR remains an indisputable icon of Canadian nationalism. [Wiki]