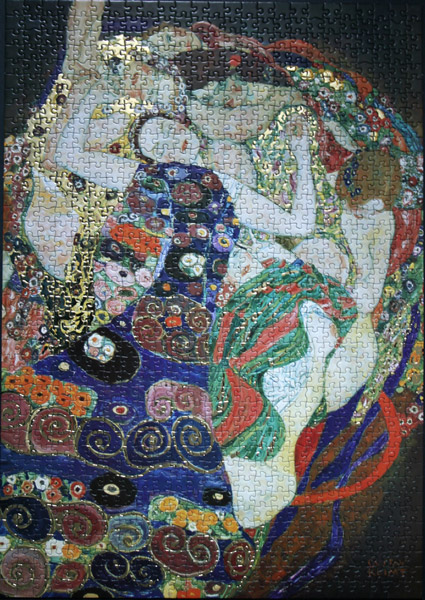 Size: 1000 pieces
Dimensions: 68cm x 48cm
Producer: Educa, Golden Art series, 7.127
Artist: Gustav Klimt (July 14, 1862 – February 6, 1918) was an Austrian Symbolist painter and one of the most prominent members of the Vienna Secession movement. His major works include paintings, murals, sketches, and other art objects. Klimt’s primary subject was the female body, and his works are marked by a frank eroticism—nowhere is this more apparent than in his numerous drawings in pencil. [Wiki]
Painting: photo
Notes: The Virgin (Due Jungfrau) was painted by Austrian symbolist painter Gustav Klimt in 1913. It depicts a woman, The Virgin, lying on a bed of flowers, surrounded by a number of other women. They are covered in cloth decorated in different patterns and symbols. As is often the case with Klimt, round shapes and symbols are used for females, which in this case means all the subjects. The flowerbed itself is surrounded by empty darkness, thus drawing our eyes to the women at the center of the painting.

Klimt partner, Emilie Flöge, is the blank face of the woman at the center of the painting. [Art-Reproductions.net site]