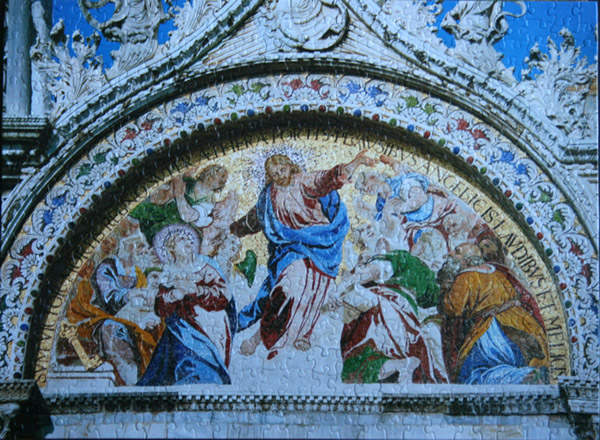 Size: 500 pieces
Dimensions: 48.26 cm x 35.56 cm
Producer: Sure-Lox
Notes: The Patriarchal Cathedral Basilica of Saint Mark is the cathedral church of the Roman Catholic Archdiocese of Venice, northern Italy. It is the most famous of the city’s churches and one of the best known examples of Byzantine architecture. It lies at the eastern end of the Piazza San Marco, adjacent and connected to the Doge’s Palace.

The exterior of the basilica is divided in three registers: lower, upper, and domes. In the lower register of the facade five round-arched portals, enveloped by polychrome marble columns, open into the narthex through bronze-fashioned doors. Above the central door round three bas-relief cycles of Romanesque art. The external cycle frames a 19th century gilded mosaic (Last Judgment) that replaced a damaged one with the same subject (during the centuries many mosaics had to be replaced inside and outside the basilica, but subjects were never changed). Mosaics about St Mark relics’ stories are in the lunettes  of the lateral portals; the first on the left is the only one in the facade preserved from the 13th century. In the upper register, from the top of ogee arches, statues of Theological and Cardinal Virtues, four Warrior Saints and St Mark watch over the city. Above the large central window of the facade, under St Mark, the Winged Lion (his symbol) holds the book quoting “Pax Tibi Marce Evangelista Meus” (Peace to you Mark my evangelist). In the lunettes of the lateral ogee arches are four gilded mosaics renewed in the 17th century. In the center of the balcony the Greek Horses face the square. [Wiki]