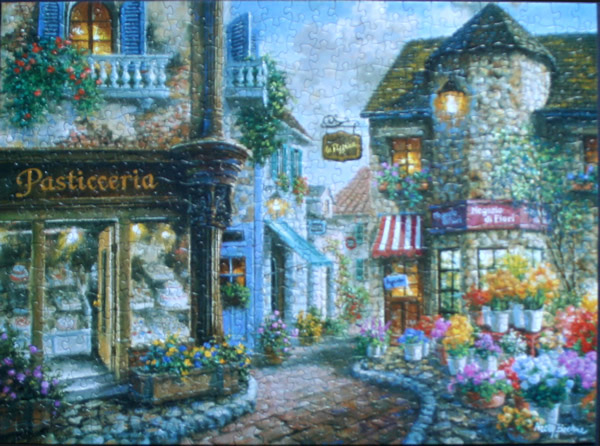 Size: 500 pieces
Dimensions: 48.26cm x 35.56cm
Producer: The Canadian Group, Sure-Lox, Taste of Tuscany series
Notes: A piazza is a city square in Italy, Malta, along the Dalmatian coast and in surrounding regions. The term is roughly equivalent to the Spanish plaza. In Ethiopia, it is used to refer to a part of a city. [Wiki]

Plaza is a Spanish word related to “field” which describes an open urban public space, such as a city square.[1] All through Spanish America, the plaza mayor of each center of administration held three closely related institutions: the cathedral, the cabildo or administrative center, which might be incorporated in a wing of a governor’s palace, and the audiencia or law court. The plaza might be large enough to serve as a military parade ground. At times of crisis or fiesta, it was the space where a large crowd might gather. Like the Italian piazza, the plaza remains a center of community life that is only equaled by the market-place. [Wiki]