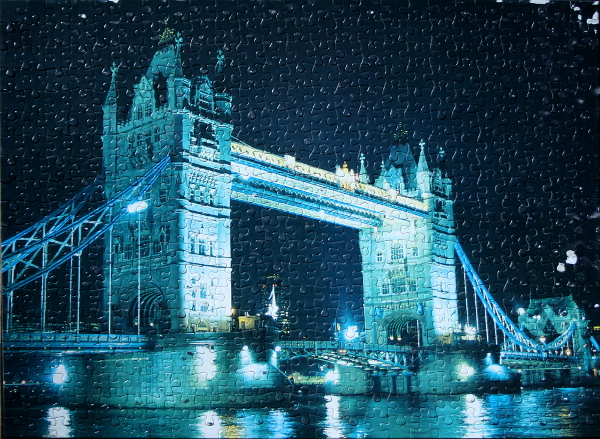 Puzzle: One of the first puzzles I have assembled, it has some glue damage from storage. The good regions to start are the water, the bright lights, and the railing on the bridge, followed by the borders between the bridge and the sky. The bridge top and towers, as well as the sky framed by the bridge can follow, leaving the remaining black of the sky to be filled in. Good lighting is a plus for the last part.

Notes: Tower Bridge (built 1886–1894) is a combined bascule and suspension bridge in London which crosses the River Thames. It is close to the Tower of London, from which it takes its name, and has become an iconic symbol of London.

The bridge consists of two towers tied together at the upper level by means of two horizontal walkways, designed to withstand the horizontal forces exerted by the suspended sections of the bridge on the landward sides of the towers. The vertical component of the forces in the suspended sections and the vertical reactions of the two walkways are carried by the two robust towers. The bascule pivots and operating machinery are housed in the base of each tower. [Wiki]