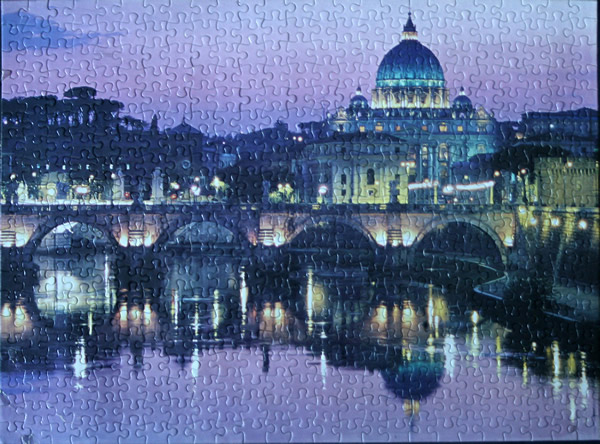 Size: 500 pieces
Dimensions: 48.4 cm x 35.5 cm
Producer: Sure-Lox
Notes: Vatican City or Vatican City State is a landlocked sovereign city-state whose territory consists of a walled enclave within the city of Rome, Italy. It has an area of approximately 110 acres, and a population of just over 800.

Vatican City was established in 1929 by the Lateran Treaty, signed by Cardinal Secretary of State Pietro Gasparri, on behalf of the Holy See and by Prime Minister Benito Mussolini on behalf of the Kingdom of Italy. Vatican City State is distinct from the Holy See, which dates back to early Christianity and is the main episcopal see of 1.2 billion Latin and Eastern Catholic adherents around the globe. Ordinances of Vatican City are published in Italian; official documents of the Holy See are issued mainly in Latin. The two entities even have distinct passports: the Holy See, not being a country, issues only diplomatic and service passports; Vatican City State issues normal passports. Very few passports are issued by either authority.

The Lateran Treaty in 1929, which brought the city-state into existence, spoke of it as a new creation (Preamble and Article III), not as a vestige of the much larger Papal States (756-1870) that had previously encompassed much of central Italy. Most of this territory was absorbed into the Kingdom of Italy in 1860, and the final portion, namely the city of Rome with Lazio, ten years later, in 1870. [Wiki]