Puzzle: Via dell’Amore by Rod Chase 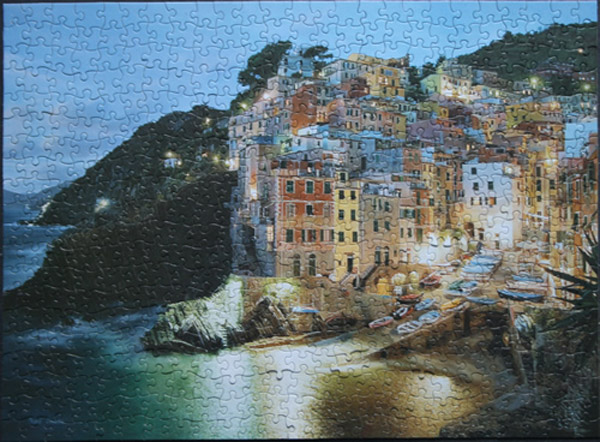 Size: 500 pieces
Dimensions: 48.26cm x 35.56cm
Producer: The Canadian Group, Sure-Lox
Artist: Rod Chase
Video: The Love Story behind Via dell’Amore
Notes: The Cinque Terre towns were extremely isolated until the last century. Villagers rarely married anyone from outside their town. After the blasting of the second train line in the 1920s, a trail was made between the first two towns: Riomaggiore and Manarola. A gunpowder warehouse was built along the way, safely away from the townspeople. (That building is today’s Bar dell’Amore.)

Happy with the trail, the villagers asked that it be improved as a permanent connection between neighbors. But persistent landslides kept the trail closed more often than it was open. After World War II, the trail was reopened, and became established as a lovers’ meeting point for boys and girls from the two towns. (After one extended closure in 1949, the trail was reopened for a Christmas marriage.) A journalist, who noticed all the amorous graffiti along the path, coined the trail’s now-established name, Via dell’Amore: “Pathway of Love.” [Smithsonian.com site]