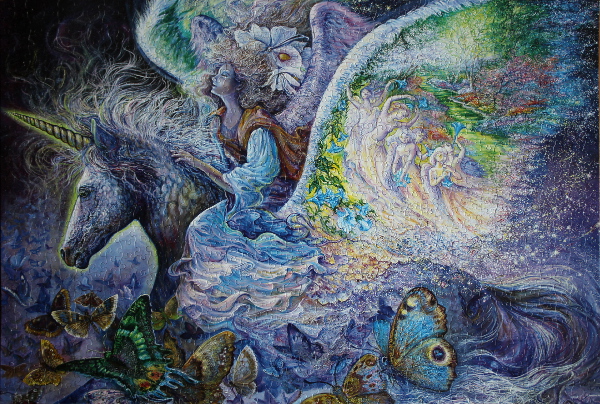 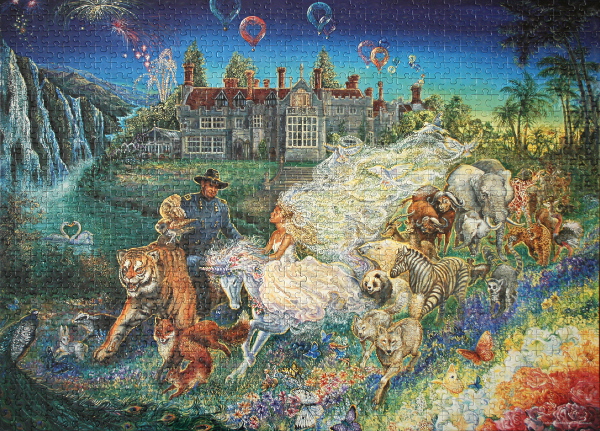 Puzzle: A simple puzzle to do, due to its many distinct elements. One can start really anywhere – good places are the rainbow-coloured flowers in the bottom right, the white of the bride and her horse, the balloons and the sky, palm trees, waterfall, and river. The building and various animals can follow, and the rest is trivial.

Notes: “At a fantasy wedding there is no need of a limousine when the bride can arrive on a pure white unicorn, and the groom on a powerful striped mount.With attendants from the jungles and plains, the happy young couple set out on their journey through life together, surrounded by all the things that have meant so much to them. What a magical day, one never to be forgotten!” [Josephine Wall site] 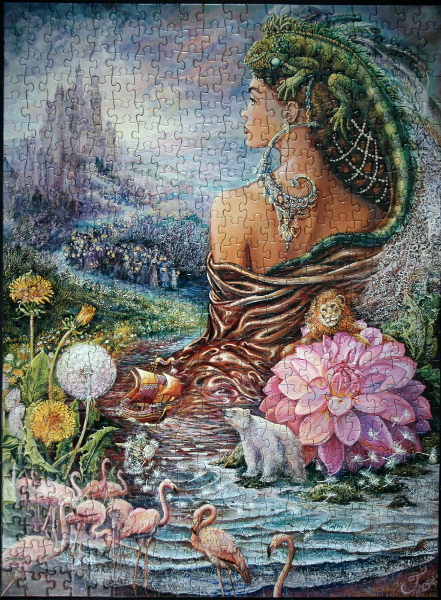 Puzzle: Trivial puzzle and a pleasure to do. Several sections are equally easy to use as anchoring points: skin, the large pink flower, the iguana, the hair net, flowing fabric, the ship, and the flamingos. The rest of the puzzle falls into place in greens, blues, and purples.

Notes: “As the planet evolves, humankind increasingly leaves the cities to seek peace and consolation in the country. There nature awaits with all her gentleness and beauty to welcome humanity into a more fulfilling way of life.” [Josephine Wall site] 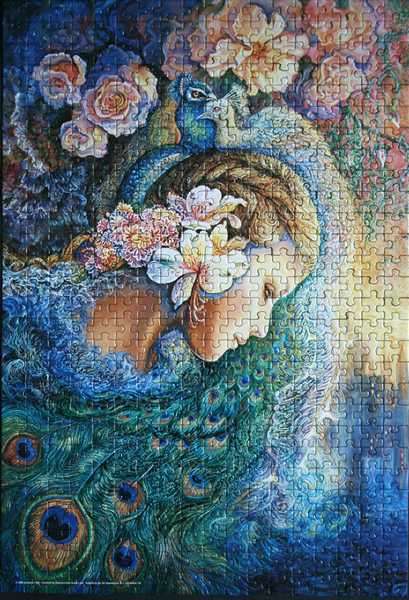 Notes:  Deep in the heart of a rose filled garden, overpowered by an intoxicating perfume, a maiden is transported into a world of daydreams. As she drifts into a trance like state, she imagines herself adorned with peacocks and exotic flowers. She enjoys her fleeting moments of escapism. [Josephine Wall’s site] 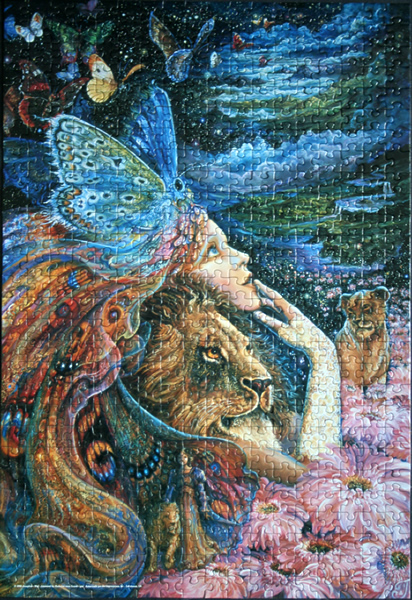 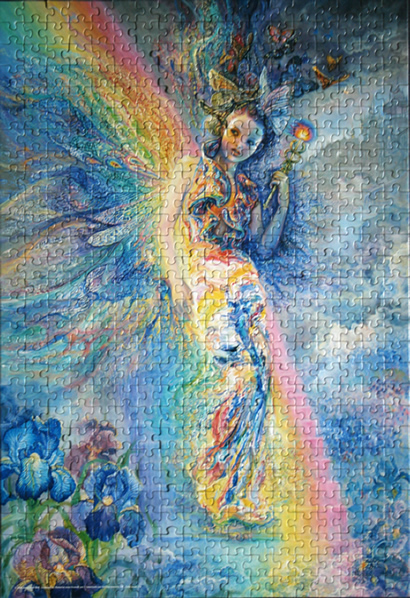 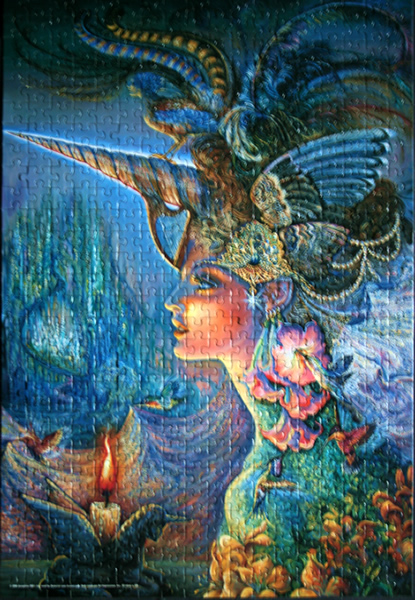 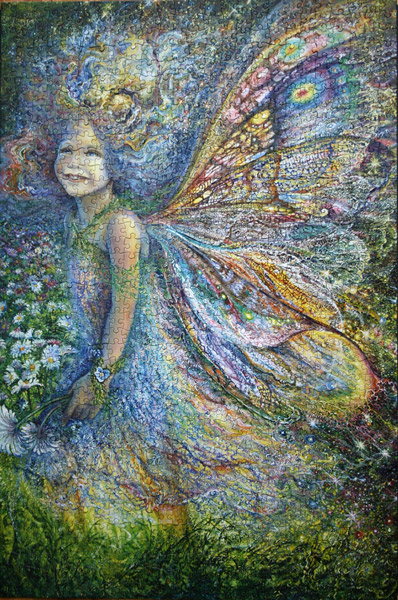 Notes:  In a sunlit glade, far from human sight the wood fairy happily gathers wild anemones. Full of the joys of spring, she adores the suns warm rays and delights in the freedom of Nature’s woodland bounty. [Josephine Wall’s site] 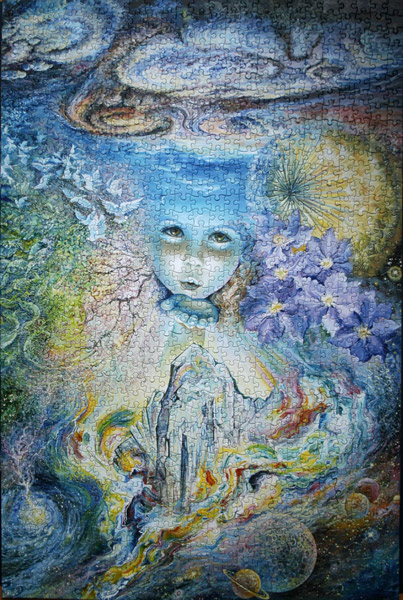 Notes:  She blows us kisses across time and space, gaining everlasting goodness and energy from her crystal. Legend has it that crystals embody the power to heal and protect so it is no wonder that the child of the universe draws from the crystal before her. Beside her is a galactic jet emitting a flood of charged particles to fill her with light and life. She gently blows her magic kisses across time and space, sending peace and beauty into our world. [Josephine Wall’s site] 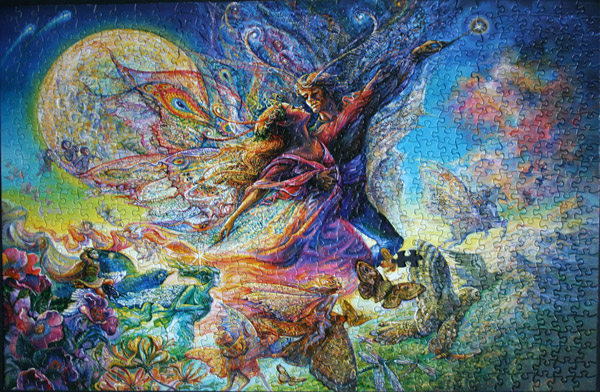 Notes: The inspiration for this image is drawn from the masterly writings of William Shakespeare. Whether he envisioned them the same, I will never know. The King & Queen of fairyland are soaring high with their winged entourage. With the beating of many wings and the heady fragrance of woodland flowers they gather for a moonlit revel. [Josephine Wall’s site] 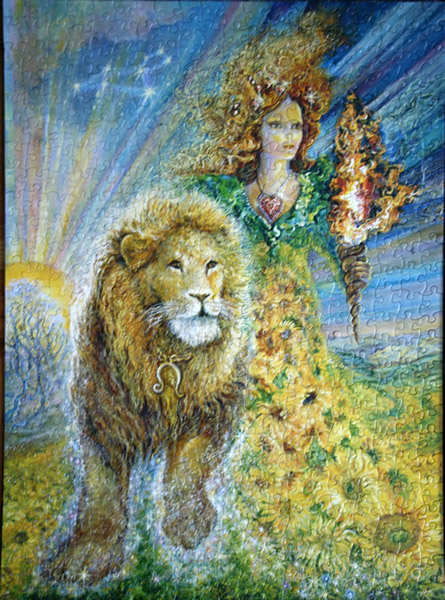 Notes:  Leo is the fifth astrological sign of the Zodiac, originating from the constellation of Leo. In astrology, Leo is considered to be a “masculine”, positive (extrovert) sign. It is also considered a fire sign and is one of four fixed signs ruled by the Sun. [Wiki]

The Persians called Leo Ser or Shir; the Turks, Artan; the Syrians, Aryo; the Jewish, Arye; the Indians, Simha, all meaning “lion”. In Babylonian astronomy the constellation was called UR.GU.LA – the ‘Great Lion’; the bright star, Regulus, that stands at the Lion’s breast also had distinctly regal associations as it was known as the King Star.

In Greek mythology, Leo was identified as the Nemean Lion which was killed by Hercules during one of his twelve labours, and subsequently put into the sky.

The Roman poet Ovid called it Herculeus Leo and Violentus Leo. Bacchi Sidus (star of Bacchus) was another of its titles, the god Bacchus always being identified with this animal. However, Manilius called it Jovis et Junonis Sidus (Star of Jupiter and Juno).

Early Hindu astronomers knew it as Asleha and as Sinha, the Tamil Simham. [Wiki] 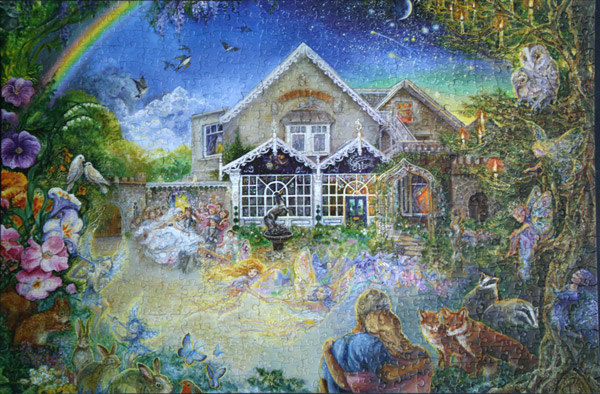 Notes: Josephine’s work was featured during the making of a television programme called Homes Under the Hammer.

The programme followed the refurbishment of a property called the Windcliffe Hotel on the Isle of Wight, from the auction purchase to it’s conversion into what has become the “Enchanted Manor”. [Josephine Wall’s site]

History of the Enchanted Manor – http://www.enchantedmanor.co.uk/our-story.html

Josephine’s work was featured during the making of a television programme called Homes Under the Hammer.

The programme followed the refurbishment of a property called the Windcliffe Hotel on the Isle of Wight, from the auction purchase to it’s conversion into what has become the “Enchanted Manor”. 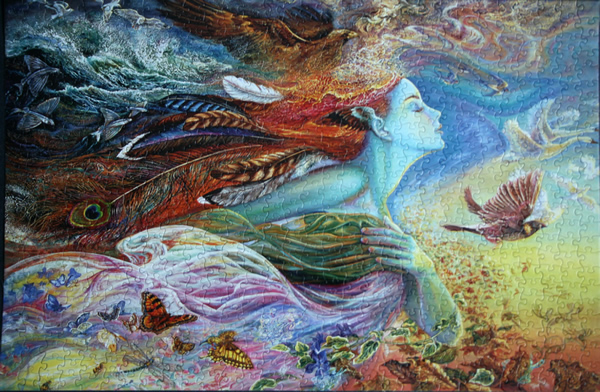 Notes: The Spirit of Flight, the force responsible for the powers of movement of the wind and air, has gathered around her all the flying things she loves. Birds, insects, flying fish, swirling leaves, seeds of dandelions and sycamore trees, butterflies and fairies all dance around her in a grand array of wild free motion. [Josephine Wall’s site] 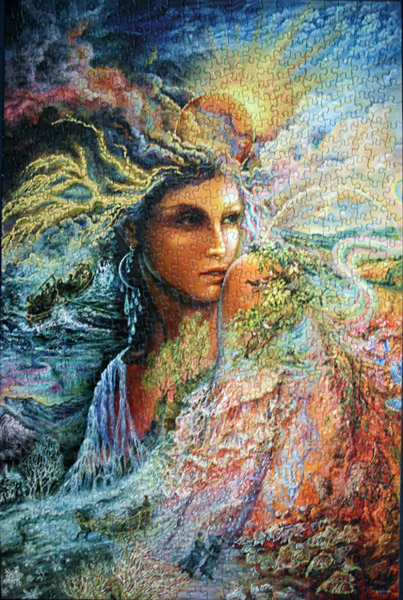 Notes: The powerful spirit rises up to fill our lives with all the elements we need to complete the cycle of nature. Raging seas challenge our courage to the limits, teaching us the skills and strength we will need to endure the storms and darkness ahead.

A winter wonderland in which the landscape is transformed into a playground for us, and allows nature to slumber, gathering strength to burst forth in all it’s splendour, as the first signs of spring approach.

As the dark skies clear, and we feel the tranquil breath of spring, we are greeted by a gleaming sun, which colludes with the gentle rain to bring us a myriad rainbows, and to restart the cycle of life. [Josephine Wall’s site] 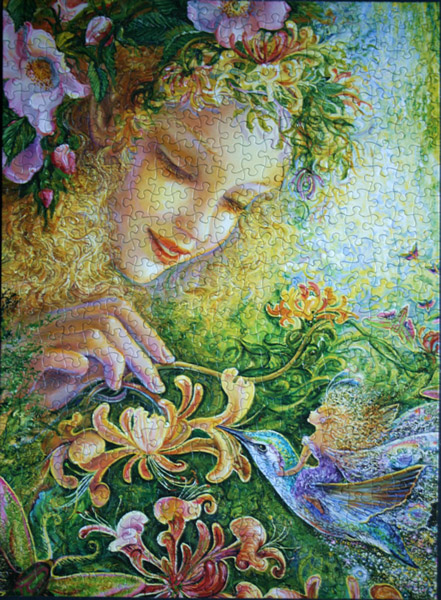 Notes:  Tender trumpets of sweetest honey wind their vines up garden walls, sharing their essence with birds and bees, bringing contentment to one and all. [Josephine Wall’s site]

Honeysuckles (Lonicera) are arching shrubs or twining vines in the family Caprifoliaceae, native to the Northern Hemisphere. There are about 180 species of honeysuckle, 100 of which occur in China; Europe, India and North America have only about 20 native species each.

Many of the species have sweetly-scented, bell-shaped flowers that produce a sweet, edible nectar. Breaking of the Honeysuckle’s stem will release this powerful sweet odor. The fruit is a red, blue or black berry containing several seeds; in most species the berries are mildly poisonous, but a few (notably Lonicera caerulea) have edible berries. [Wiki] 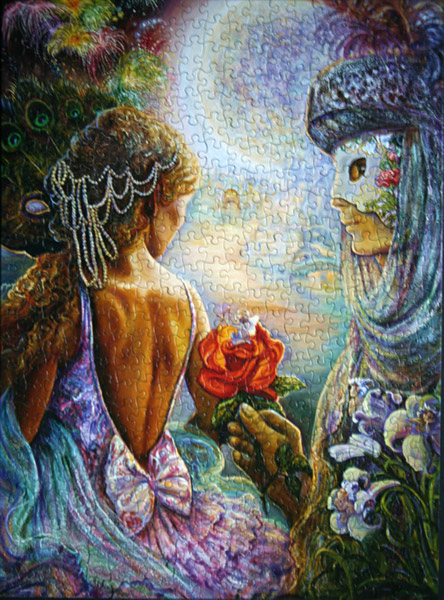 Notes:  Having danced the night away she can pretend no more.  Struck by Cupids arrow she coyly comes out from behind her mask of peacock feathers to reveal herself for the first time to her masked partner.  Having only been able to look into each others eyes ( the windows of the soul ) she knows their feelings for each other are true, and uncomplicated by physical appearance.  How can she resist when surrounded by the hypnotic perfume of love. [Josephine Wall’s site] 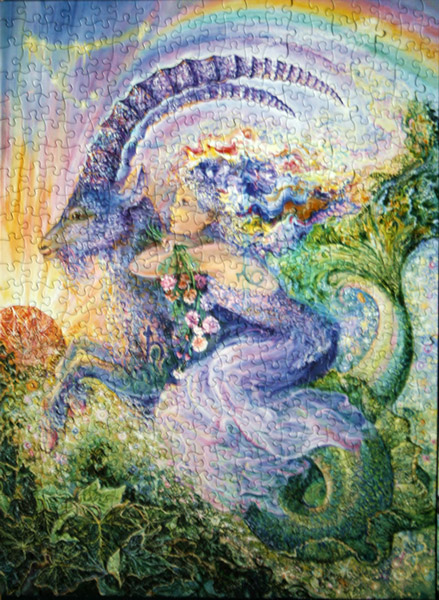 Notes: Capricorn’s form of half goat, half fish derives from ancient Babylonian mythology, in which Ea, the Sea-Goat and Lord of Wisdom, emerges from his home in the sea to bring civilization and knowledge to mankind. In the zodiac, the placement of the constellation represents high achievement. Steady, purposeful, and long-sighted, Capricorns have a plan for the future and set their sights high. They seek security and certainty, and insist that rules be followed. But don’t let that fool you into thinking Capricorns are all work and no play: they have a lively wit, a dry sense of humor, and that rare combination, creativity coupled with organization! [Josephine Wall’s site] 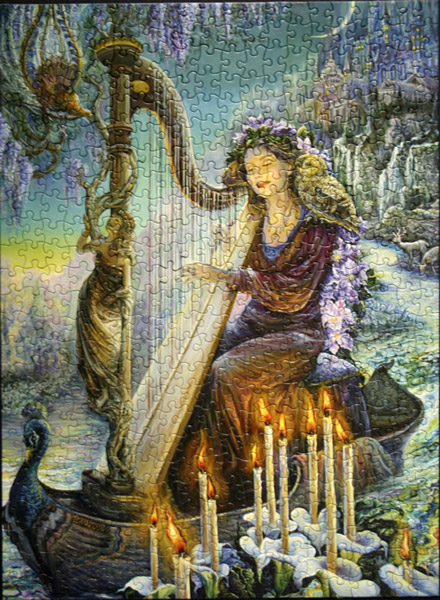 Notes: As the goddess Minerva glides gently down the eternal river of life, leaving her heavenly citadel in her wake, she sets about her task of composing beautiful music. She is accompanied by her constant companion, and confidant – the ‘owl of wisdom’. Together they travel throughout the world bringing the magic of her melodies to all. Arum lilies bearing candles light their way, and illuminate the wisteria growing from her enchanted harp.Music is a universal language understood and loved by every nation on earth – what a debt we owe to Minerva.[Josephine Wall’s site] 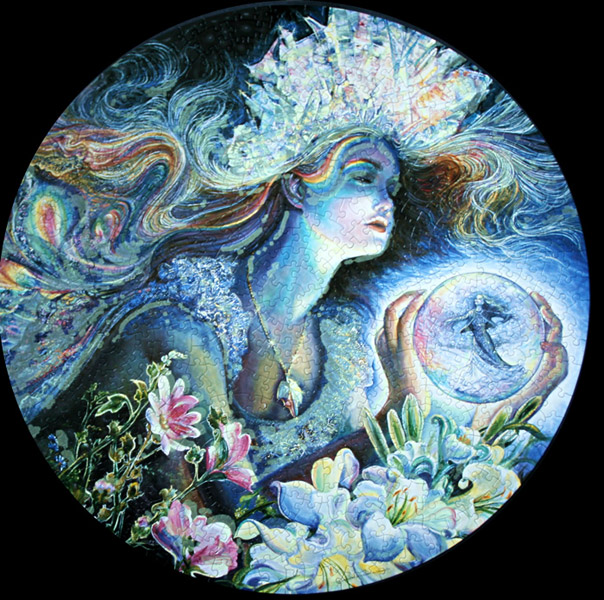 Notes: With hair of glistening crystal the princess revels in her task of bringing light to the world. Shining brightly her precious orb reflects her earthly guise, attracting the attention of some passing moths. Flowers burst into bloom excited by her life giving light. The princess travels on, bringing light to even the darkest corners of our world. [Josephine Wall UK site] 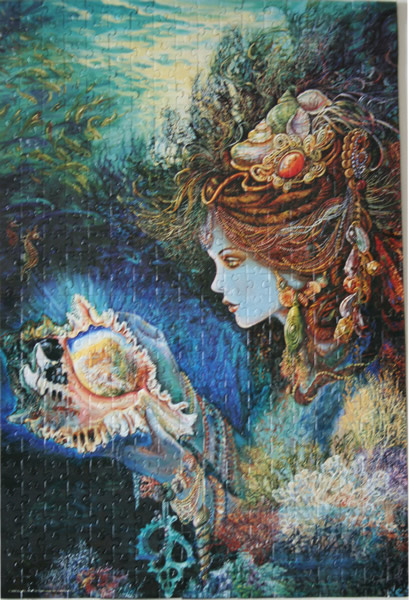 Notes: Mortals hold seashells to their ears to hear the sounds of the seas and imagine life in the deep waters below. Perhaps a mermaid would look into a seashell to see and hear the sights and sounds of the earth above. All of us can embark on a magical voyage through the universe using our imaginations to carry us along. [Josephine Wall UK site]