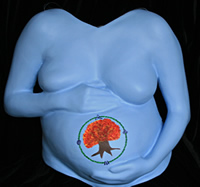 In August (about a month before my due date, and a bit more before Alaric was actually born), I travelled to Julie Keon’s studio in Cobden for a belly casting session. The result of this session was a white body cast from shoulders to top of the legs including the arms and hands, made with hospital grade plaster-gauze strips. The cast remained with Julie for a few weeks to be completed, strengthened and painted the shade of blue I have picked leaving the centre of the belly white for further decoration. 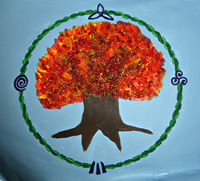 Julie had dropped the cast off about three weeks after Alaric’s birthday, and I had it set up in the basement. After collecting the required paints and beads, I’ve been working on the cast in 10-minute increments when the opportunity presented itself. Finally, I have completed decorating my belly cast last week and Julie has stopped by to finish it with a matte varnish.

The decoration includes a Celtic knot circle with four Celtic signs, encircling the tree in fall colours to symbolize my autumn-born son.

The signs denote the following:

Triquetra: there are many interpretations of this symbol,
the one chosen here is mother, father, child.

Arwen: the first ray stands for male energy,
the third one for female energy, and the middle one for balance,
this is a Celtic version of Yin-Yang.

Single spiral: birth and growth, evolution,
surrender, release,
awareness of the one within the context of the whole.

The cast will serve as Alaric’s birth token and as a reminder of the ever-changing form of female body in childbirth – the memory of those changes already fading.