Lessons learned by the 6 month mark

I have not written much on procreation since my one-month postpartum post. The primary reason for it is that I am, naturally, very busy taking care of the baby and trying to keep all my projects going while at the same time working part-time. However, it is also very hard to decide what deserves to be a subject of a post without being a reiteration of the information widely available in baby books. And so, I decided to write now, as I’m nearing 6 months postpartum, about my experiences and how they might differ from what I would have expected if I fully trusted the baby books. 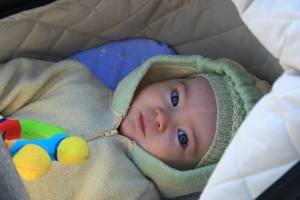 Many books talk about “baby” as a creature that behaves in a certain way from birth to a year. Very few are making a distinction based on the age of the baby measured in months. When they talk about breastfeeding, the advice and descriptions of it are usually generic for any infant. Yet I found that the way my baby fed in the first (approximately) three months is quite different from the way he feeds now. Same goes for interactions, reactions to the outside world, and so on. Without knowing this difference based on the age, the changes observed in the infant’s behaviour would leave one uncertain in their approach to baby care.

During the first three months of his life, my baby could breastfeed for 20-30 minutes on end, snoozing satisfied against my breast. We started breastfeeding lying down within the first month and both found it the most comfortable. Later on, right around the three-month mark, he became more distracted by other things: play of light on the curtains, the cat passing by, sounds outside; and would not be content suckling for a long time. Now he also pulls away from the breast to smile at me and babble. He still seems to find breastfeeding the most comforting way to fall asleep, but it appears to be harder for him to fall asleep in general, since the big bright world around him is waiting to be explored.

In the first two months, the baby was crying loudly when he needed attention. We were very responsive: when his cries were demanding (as opposed to him lying in his crib upon awakening, cooing to himself) we attended to his needs right away, be that hunger, sleepiness, need for change or comfort. He would stop crying once his needs were met. He also started smiling socially early on, especially when we would talk or sing to him. Now, he has more patience when his needs are about to be attended to: he quiets down. He seems to understand when we acknowledge his distress and he stops complaining as he waits for what steps might be taken to rectify the discomfort. It seems, he connects certain places in the house with comfort: he stops crying when being carried to the change table (or if I bring a diaper to where he is) if he needs a change; when being put down on the bed with me lying down next to him if he is hungry; when being carried around and sung to if he is sleepy.

The baby also does not cry as much. He cries when scared or in pain, but if all he needs is a change or if he is bored, he complains instead by making sad noises, as if saying: I need some attention here, something is not right. Only if you repeatedly ignored his request, would he turn it into a demand made with shrilling noises or crying. 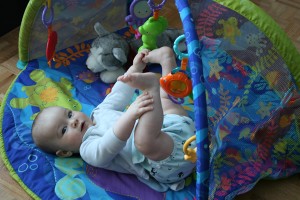 The baby’s array of interactions is growing: he smiles when sung to and played with, laughs when tickled or talked to in a silly voice, gets scared of loud noises and sometimes from what appears to be a bad dream. He is excited when photos are being taken and sometimes smiles at the camera being pointed at him or at the sound of the shutter clicks. He likes the sound of a phone dialing a number and listens attentively to the one-sided conversation, sometimes attempting to participate. He is experimenting with a range of motion, trying to roll from his tummy to his back and vice versa, and trying to crawl (although not very successfully at this point).

For a few weeks, he appeared to be very concentrated on observing his hands and what they can do: grasping things, swatting at moving objects, banging on surfaces, pinching people, looking at his fingers and palms in wonder. Now, for about two weeks, he is exploring what his feet can do. The socks come off as soon as they are put on, he grabs his feet, moves them around, and tries to stick one into his mouth. He is behaving much more like a little human than like a scared blind puppy.

The baby loves being entertained in the past three-four months. He is listening attentively and looking at a book being read aloud to him, listening to the songs we sing, recognizing certain songs by the first line or by the melody and smiling in recognition. I have been also listening to some lectures, and he quiets down and listens attentively along with me. 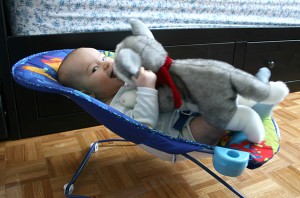 He loves his tummy time: he is able to stay on his tummy without getting tired a lot longer than in the first couple of months, and usually expresses discomfort only when something else is uncomfortable: like when he is wet. Otherwise he can be on his tummy for long stretches of time, rolling over, wriggling around, and exploring toys and hands for much longer periods of time.

At first he looked at toys in passing, and did not play with them for long. Now he actively reaches for toys, can explore them for a long time, and greets his favourites with rapid leg movements and grasping hand gestures in excitement to grab the toy. He also does get bored with toys or activities and expresses it by throwing the toy away or complaining.

We have taken his first airplane flight from Ottawa to Winnipeg to attend a family wedding when the baby was 5 months old. He took the flight quite well. I breastfed on take-off and landing, and my husband walked with him up and down the isle when the baby got uncomfortable, sleepy, or bored. The plane had a changing table (we flew by WestJet) in the bathroom at the back, which was quite tiny, but served its purpose. The baby seemed to be scared of the engine noise upon take-off the first time, so that he clung to me and looked at me with wide-open eyes. The breast and my reassuring tone seemed to have worked to calm him down, and he soon settled to sleep.

The wedding itself ended up being more stressful for the baby and myself than the airplane flight. The baby was bored and overwhelmed by so many people, so all he wanted to do was to be carried. We had a bouncy chair for him with toys, but he barely looked at them and demanded to be picked up. The loud music prevented him from sleeping which caused him to grow more and more upset. Sitting still was boring. Clapping after a slide show came unexpected and scared him. Even feeding would not get him more comfortable. My husband and I have carried him in the sling for the entire wedding, and came out of it quite drained.

A few times we hosted a get-together at our place and invited a few guests (from 1 to 17 people on different occasions). Those gatherings that occurred in the first three month were a trial on us. The baby would not settle down (unless people were quiet enough to let him sleep, which rarely happened) and we ended up taking turns attending to his needs instead of enjoying the company. 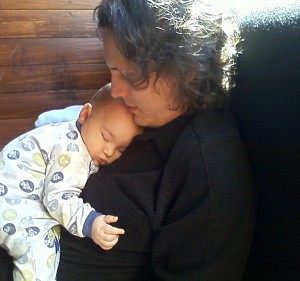 A few recent parties have turned out better: he was more involved in the proceedings, interacting with people, listening to conversations and music, and, when he was tired, being able to sleep in his own crib (noise levels allowing). So, in our case, it would have been better to limit the socializing in the early months to one or two people at a time, doing it later in the evening when the baby was mostly asleep, and with the people trying not to make too much noise. Living far away from family, however, limited our options, as we had to adjust to the times and numbers in which people could visit.

Starting in the early months and up until now, the best way to socialize with other adults has been going out for lunch. The baby is generally in a better mood earlier in the day, willing to take in new surroundings and interact with people, and does not mind sitting on our lap or lying next to us on the table and listening to the conversation. Sometimes we have to eat in turn, but that is not too hard to do during lunch as the portions are not huge and the lunch does not last for hours. And sometimes he just falls asleep on his papa and peacefully snoozes through a large portion of the outing.

Overall, the baby is now more comfortable in this new body of his, the respiratory and digestive systems are adjusted to the world outside the womb, and he knows that his needs will be attended to. Thus he is more willing to venture from his comfortable place at my side to explore the outside world, knowing that he can always retreat if the universe springs something too overwhelming on him.