Puzzles Puzzle: Above the Clouds by Ciro Marchetti

Puzzle: Above the Clouds by Ciro Marchetti 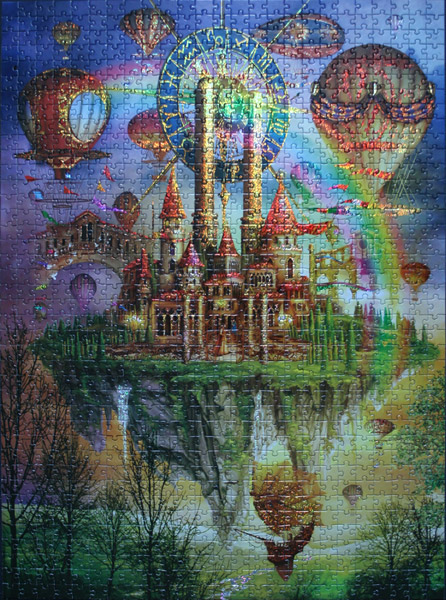 Size: 1000 pieces
Dimensions: 51cm x 68cm
Producer:  LPF Ltd., Holographic puzzle, #3921
Artist: Ciro Marchetti has had a successful graphic design career that has spanned working in Europe, South America and the US. He is a five-time recipient of the distinguished Photoshop GURU award, and three time winner of the Worldwide Photoshop Competition presented by the National Association of Photoshop Professionals. The current content and style of recent illustrations directly reflect his sources of interest and inspiration, allowing him to create richly detailed images that conjure up retro- tech worlds of fantasy and imagination. [Puzzle box]

Puzzle: From the same series as City of Wands, City of Coins, and Shangri-La Winter, by Ciro Marchetti.

Notes: Within the troposphere, red, orange, and pink clouds occur almost entirely at sunrise/sunset and are the result of the scattering of sunlight by the atmosphere. When the angle between the sun and the horizon is less than 10 percent, as it is just after sunrise or just prior to sunset, sunlight becomes too red due to refraction for any colors other than those with a reddish hue to be seen. The clouds do not become that color; they are reflecting long and unscattered rays of sunlight, which are predominant at those hours. The effect is much like if one were to shine a red spotlight on a white sheet. In combination with large, mature thunderheads, this can produce blood-red clouds. Clouds look darker in the near-infrared because water absorbs solar radiation at those wavelengths.

In high latitude regions of the stratosphere, nacreous clouds occasionally found there during the polar winter tend to display quite striking displays of mother-of-pearl colorations due to the refraction and diffusion of the sun’s rays through thin ice crystal clouds that often contain compounds other than water. At still higher altitudes up in the mesospere, noctilucent clouds sometimes seen in polar regions in the summer usually appear a silvery white that can resemble brightly illuminated cirrus. [Wiki]