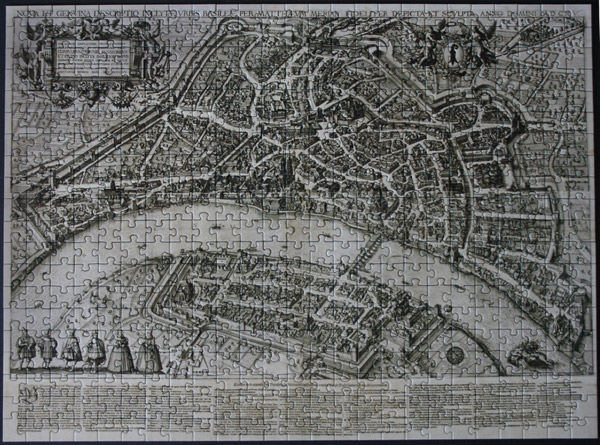 Translation: City Map of Basel by Matthäus Merian, 1615-17
Size: 500 pieces
Dimensions: 49cm x 36cm
Producer: Historical Museum Basel
Story: “Since it was executed by Matthäus Merian in 1615 and presented to Basel’s City Council, the large map of the city of Basel, a handcolored pen-and-ink drawing now housed in the Historical Museum, has always been greatly admired. Its correct reproduction of numerous details that have since disappeared make the map an incomparable document on the image of the 17th-century city.

Careful observation will reveal that this is not only an artistic work but one based on geometry as well, a fact alluded to by the compass drawn in on the scale of measure. If one follows Merian’s career, however, it would seem that there was no time available to him for this kind of work. Born in 1593, Merian went to Zurich when he was 16 years old to be educated under the engraver and painter Dietrich Meyer. After his apprenticeship Merian traveled to Nancy and then to Paris where he worked out a map for the city of Paris in 1615. When then could he have surveyed the city of Basel? I make bold to assume that Merian’s city map took Hans Bock’s survey, commissioned by the government in 1588, as its basis. This assumption in no way diminished Matthäus Merian’s great contribution in service to his native city.” [From F.Burchhardt. Über Pläne und Karten des Baselgebietes aus dem 17.Jahrhundert (On 17th-century maps and plans of the area in and around Basel)]