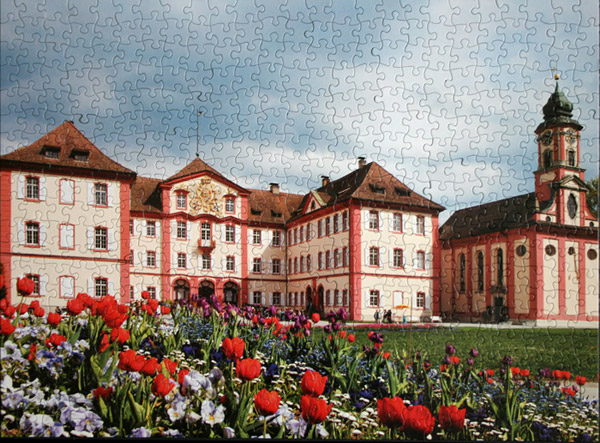 Size: 500 pieces
Dimensions: 48.26cm x 35.56cm
Producer:  The Canadian Group, Sure-Lox, Photo Gallery 10 puzzle pack
Notes:  Thanks to JLuecking’s comment below, I now know that this castle is the Castle of the Teutonic Order, and it is located on the Mainau Island, Lake Constance (Bodensee).

Mainau is an island in Lake Constance (on the south shore of the Überlinger See near the city of Konstanz, Baden-Württemberg, Germany). It is maintained as a garden island and a model of excellent environmental practices. [Wiki]

The Castle of the Teutonic Order is the architectural focal point on the island and a splendid setting for various occasions. It is the heart of the Mainau island and where the Bernadotte family lives. The Castle of the Teutonic Order was designed by Johann Caspar Bagnato and built under his supervision (1739 – 1746). Despite limited finances, he created an architecturally well-balanced, symmetrical harmonious castle. The arms of the two wings open out in the shape of a horse-shoe towards the mainland; whilst the back of the building faces the lake. [Mainau site]

A castle (from Latin castellum) is a type of fortified structure built in Europe and the Middle East during the Middle Ages by European nobility. Scholars debate the scope of the word castle, but usually consider it to be the private fortified residence of a lord or noble. This is distinct from a palace, which is not fortified; from a fortress, which was not always a residence for nobility; and from a fortified settlement, which was a public defence – though there are many similarities among these types of construction. Usage of the term has varied over time and has been applied to structures as diverse as hill forts and country houses. Over the approximately 900 years that castles were built they took on a great many forms with many different features, although some, such as curtain walls and arrowslits, were commonplace. [Wiki]