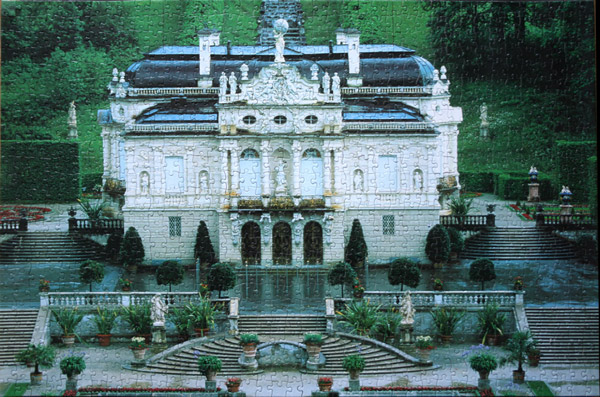 Size: 1000 pieces
Dimensions: 73cm x 48.6cm
Producer: Sure-Lox, The Canadian Group, Impressions series
Notes: The Palace of Fontainebleau, located 55 kilometres from the centre of Paris, is one of the largest French royal chateaux. The palace as it is today is the work of many French monarchs, building on an early 16th century structure of Francis I. The building is arranged around a series of courtyards. The city of Fontainebleau has grown up around the remainder of the Forest of Fontainebleau, a former royal hunting park.This forest is now home to many endangered species of Europe.

The palace introduced to France the Italian Mannerist style in interior decoration and in gardens, and transformed them in the translation. The French Mannerist style of interior decoration of the 16th century is known as the “Fontainebleau style”: it combined sculpture, metalwork, painting, stucco and woodwork, and outdoors introduced the patterned garden parterre. The Fontainebleau style combined allegorical paintings in moulded plasterwork where the framing was treated as if it were leather or paper, slashed and rolled into scrolls and combined with arabesques and grotesques. Fontainebleau ideals of female beauty are Mannerist: a small neat head on a long neck, exaggeratedly long torso and limbs, small high breasts—almost a return to Late Gothic beauties. [Wiki]