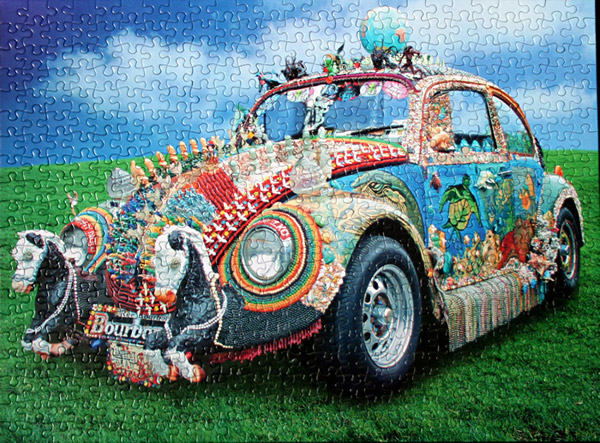 Size: 500 pieces
Dimensions: 48.26 cm x 35.56 cm
Producer: The Canadian Group, Sure-Lox, Impressions series
Notes: The Volkswagen Type 1, widely known as the Volkswagen Beetle and Volkswagen Bug, is an economy car produced by the German auto maker Volkswagen (VW) from 1938 until 2003. With over 21 million manufactured in an air-cooled, rear-engined, rear-wheel drive configuration, the Beetle is the longest-running and most-manufactured automobile of a single design platform anywhere in the world.

Like its contemporaries, the Mini, the Citroen 2CV, and the Fiat 500, the Beetle has long outlasted predictions of its lifespan. It has been regarded as something of a “cult” car since its 1960s association with the hippie movement and surf culture; and the obvious attributes of its unique and quirky design. (For example, the Beetle could float on water thanks to its sealed floor pans and overall tight construction, as shown in the 1972 Volkswagen commercial). [Wiki]