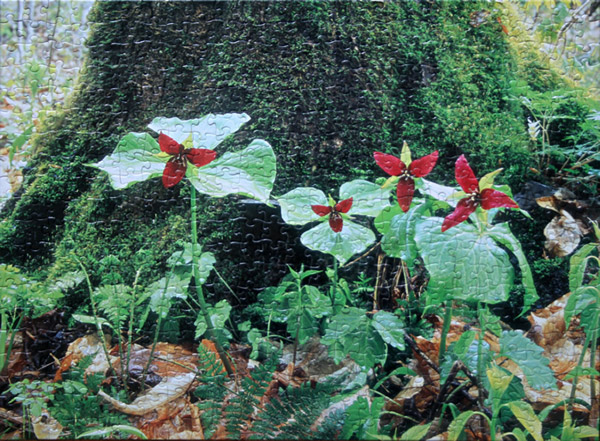 Size: 500 pieces
Dimensions: 48.26cm x 35.56cm
Producer: Sure-Lox, The Canadian Group
Notes: A forest, also referred to as a wood or the woods, is an area with a high density of trees. These plant communities cover approximately 9.4 percent of the Earth’s surface (or 30 percent of total land area), though they once covered much more (about 50 percent of total land area). Although forests are classified primarily by trees, the concept of a forest ecosystem includes additional species (such as smaller plants, fungi, bacteria, and animals) as well as physical and chemical processes such as energy flow and nutrient cycling.

A typical forest is composed of the overstory (canopy or upper tree layer) and the understory. The understory is further subdivided into the shrub layer, herb layer, and also the moss layer and soil microbes. In some complex forests, there is also a well-defined lower tree layer. Forests are central to all human life because they provide a diverse range of resources: they store carbon, aid in regulating the planetary climate, purify water and mitigate natural hazards such as floods. Forests also contain roughly 90 percent of the world’s terrestrial biodiversity. [Wiki]