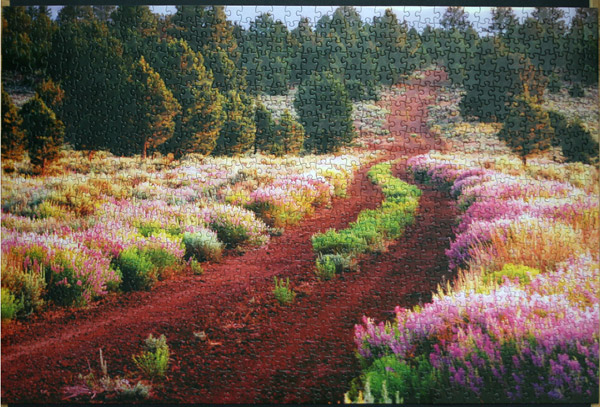 Size: 1000 pieces
Dimensions: 73cm x 48.57cm
Producer: The Canadian Group, Sure-Lox, Country Roads series
Notes: Lupins or lupines (North America) are the members of the genus Lupinus in the legume family (Fabaceae). The genus comprises between 200 and 600 species, with major centers of diversity in South and western North America, and in the Mediterranean region and Africa.

The yellow legume seeds of lupins, commonly called lupin beans, were popular with the Romans, who spread the plant’s cultivation throughout the Roman Empire. The name ‘Lupin’ derives from the Latin word ‘lupinus’ (meaning wolf), and was given with regard to the fact that many found that the plant has a tendency to ravage the land on which it grows. The peas, which appear after the flowering period were also said to be fit only for the consumption of wolves. [Wiki]