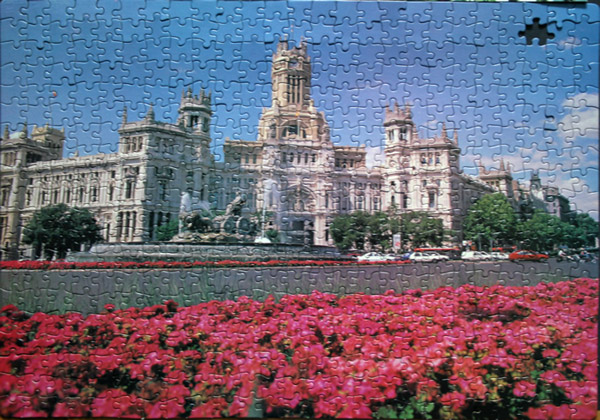 Size: 500 pieces, 1 missing
Dimensions: 37 cm x 52 cm
Producer:  GPC Puzzles, Regency Collection, #1550-08
Notes: The Plaza de Cibeles is a square with a neo-classical complex of marble sculptures with fountains that has become an iconic symbol for the city of Madrid. It sits at the intersection of Calle de Alcala (running from east to west), Paseo de Recoletos (to the North) and Paseo del Prado (to the south). Plaza de Cibeles was originally named Plaza de Madrid, but in 1900, the City Council named it Plaza de Castelar, which was eventually replaced by its current name.

The most prominent of the buildings at the Plaza de Cibeles is the Cibeles Palace (formerly named Communications Palace). The cathedral-like landmark was built in 1909 by Antonio Palacios as the headquarters of the postal service. This impressive building was home to the Postal and Telegraphic Museum until 2007 when the landmark building became the Madrid City Hall. [Wiki]