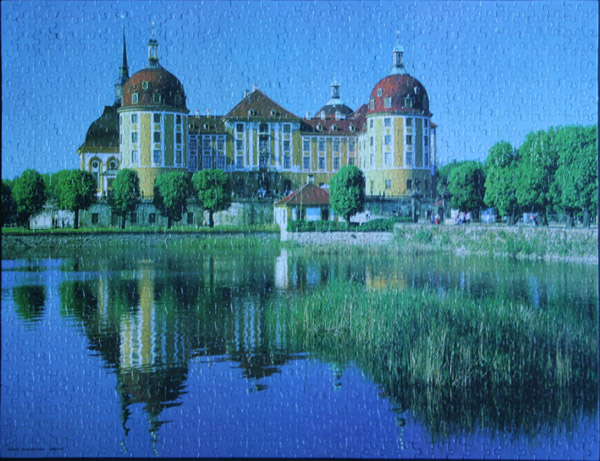 Size: 1000 pieces
Dimensions: 51.12cm x 66.52cm
Producer: Big Ben, MB Puzzles
Notes: The original castle was built from 1542–1546 as a hunting lodge for Moritz of Wettin, then Duke of Saxony. Elector John George II of Saxony  had it extended and between 1661 and 1671 the chapel was added after designs by his architect Wolf Caspar von Klengels, a fine example of the early Baroque style. After in 1697 John George’s grandson Elector Frederick Augustus I had converted to Catholicism in order to secure his election as King of Poland, the chapel was consecrated in the Catholic rite. Between 1723 and 1733, Augustus had the castle largely remodelled as a pleasure seat by the architects Matthaus Daniel Poppelmann and Zacharias Longuelune, including a formal park, several ponds and a game preserve. The last resident from the House of Wettin was Prince Ernst Heinrich of Saxony, dispossessed in 1945 by the Soviet Military Administration in Germany. [Wiki]