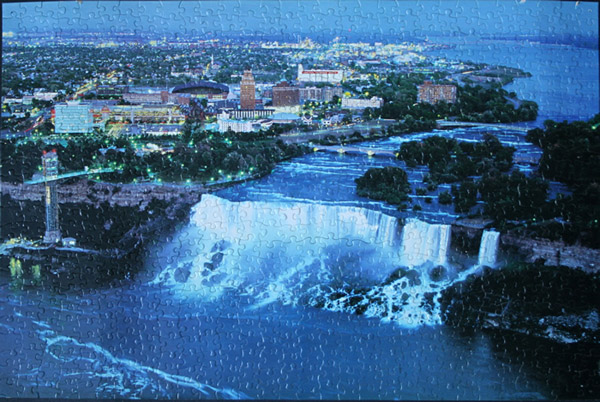 Size: 750 pieces
Dimensions: 59.7 cm x 39.4 cm
Producer: Sure-Lox
Notes: The Niagara Falls are waterfalls in North America. These voluminous waterfalls are situated on the Niagara River, straddling the international border between the Canadian province of Ontario and the U.S. state of New York. The falls are 27 km north-northwest of Buffalo, New York and 121 km south-southeast of Toronto, Ontario, between the twin cities of Niagara Falls, Ontario, and Niagara Falls, New York.

Niagara Falls is composed of two major sections separated by Goat Island: the Horseshoe Falls on the Canadian side and the American Falls on the American side. The smaller Bridal Veil Falls are also located on the American side, separated from the main falls by Luna Island. Niagara Falls were formed when glaciers receded at the end of the Wisconsin glaciation (the last ice age), and water from the newly formed Great Lakes carved a path through the Niagara Escarpment en route to the Atlantic Ocean. [Wiki]