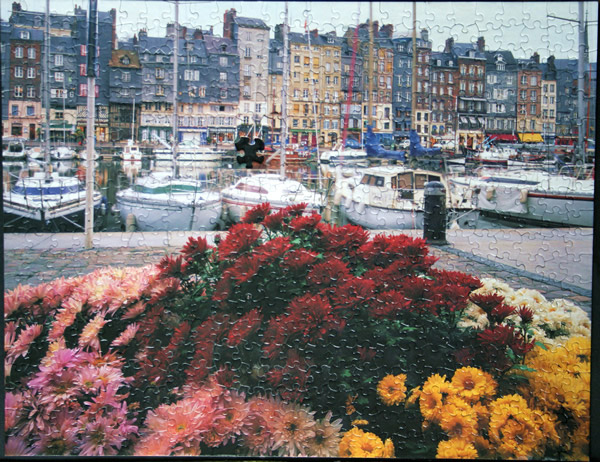 Size: 500 pieces, 1 missing
Producer: Puzzle World
Notes: Normandy (French: Normandie, Norman: Nourmaundie, from Old French Normanz, plural of Normand, originally from the word for “northman” in several Scandinavian languages) is a geographical region corresponding to the former Duchy of Normandy. It is situated along the English Channel coast of Northern France between Brittany (to the west) and Picardy (to the east) and comprises territory in northern France and the Channel Islands. The continental territory covers 30,627 km² and forms the preponderant part of Normandy and roughly 5% of the territory of France.

Normandy is a major cider-producing region (very little wine is produced). Perry is also produced, but in less significant quantities. Apple brandy, of which the most famous variety is calvados, is also popular. The mealtime trou normand, or “Norman hole”, is a pause between meal courses in which diners partake of a glassful of calvados in order to improve the appetite and make room for the next course, and this is still observed in many homes and restaurants. [Wiki]