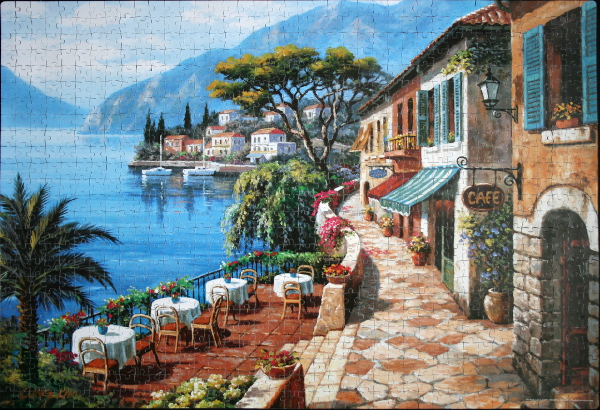 Size:  1000 pieces
Dimensions: 67.3 cm x 45.4 cm
Artist: Sung Kim – Born in 1940 in Seoul, South Korea, Sung began to exhibit his artistic talents early in childhood. Beginning in grade school, Sung entered and won various art contests by displaying his creativity and artistic imagination. He decided to pursue his passion for art and graduated with honors from Seorabol Art College in Seoul. Later he opened his own studio and worked as an illustrator for various magazines and children’s books. Sung’s artistic abilities were acknowledged when he was awarded the Grand Prize in an art competition by the Minister of Culture in South Korea and the Gold Medal prize in the art competition given by the Mayor of Seoul. He traveled throughout Europe before immigrating to the United States in 1980. For the last 20 years, Sung has worked with various fine art galleries and has produced over 400 original landscape paintings. [Tutt Art site]
Painting: original
Producer: Wrebbit, Perfalock foam puzzle series, 2005, 20068

Puzzle: A very enjoyable puzzle. I have not done foam puzzles for a while now, and this one was a reminder of a different squishy feel I liked about the foam pieces. They fit together quite well. The logical parts with which to start are the turquoise shutters and striped canopy, the white tablecloths and the chairs and railing next to them, the flower arrangements, the cafe sign and the light above it, the balcony, and the palm tree. The large tree with dark branches and houses in the distance with boats and water reflections, the patio, the pavement, and the black doorways can come next. Once all that remains are the mountains and the sky, tracing the border between them is easiest, and the rest of the pieces fall into place.