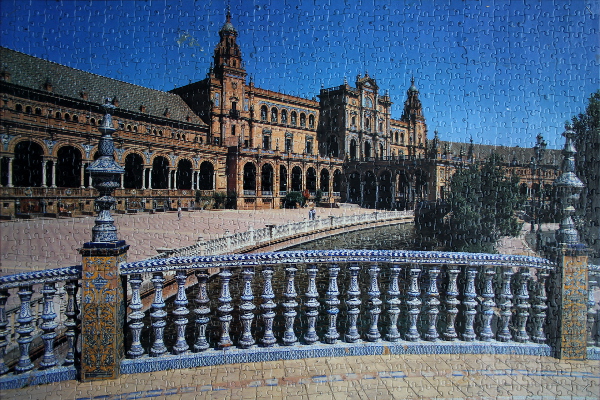 Size: 1000 pieces
Dimensions: 73cm x 48.6cm
Producer: Impressions, Sure-Lox
Notes: The Plaza de España is a building in Maria Luisa Park, in Seville, Spain built in 1928 for the Ibero-American Exposition of 1929. It is a landmark example of the Renaissance Revival style in Spanish architecture. The Plaza de España, designed by Aníbal González, was a principal building built on the Maria Luisa Park’s edge to showcase Spain’s industry and technology exhibits. González combined a mix of 1920s Art Deco and ‘mock Mudejar’, and Neo-Mudéjar styles. The Plaza de España  complex is a huge half-circle with buildings continually running around the edge accessible over the moat by numerous beautiful bridges. In the centre is a large fountain. By the walls of the Plaza are many tiled alcoves, each representing a different province of Spain. [Wiki]