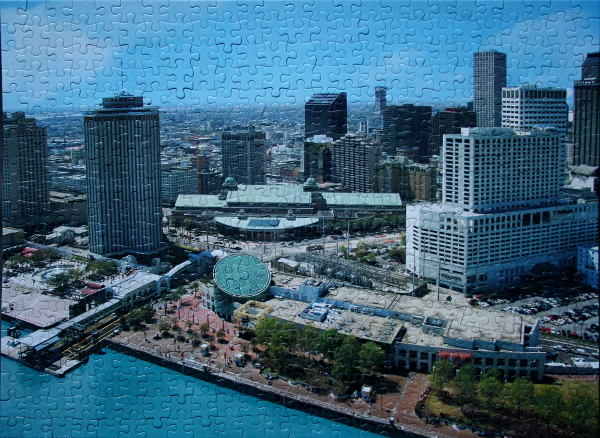 Puzzle: Simple puzzle to do. Starting from the uniform areas of colour: the water, the sky, the green of trees, the circular structure and the light green roof of the low building can be followed by the beige roof with blue regions, and the larger skyscrapers. From that point on, there are enough vertical guides for the rest of the pieces to follow.
Notes: New Orleans is a major United States port and the largest city and metropolitan area in the state of Louisiana. The city is named after Orléans, a city located on the Loire River in Centre, France, and is well known for its distinct French Creole architecture, as well as its cross-cultural and multilingual heritage. New Orleans is also famous for its cuisine, music (particularly as the birthplace of jazz), and its annual celebrations and festivals, most notably Mardi Gras. [Wiki]