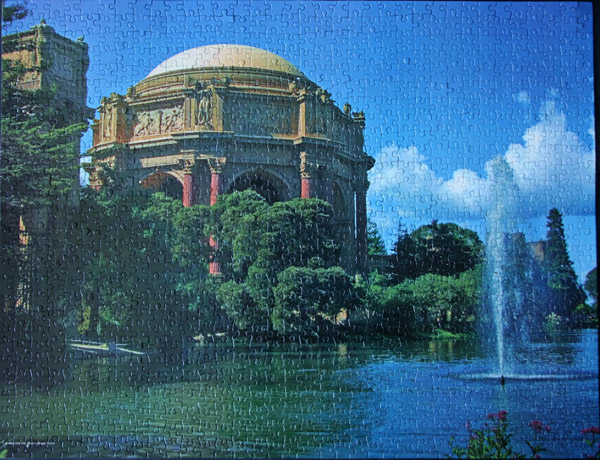 Size: 1000 pieces
Dimensions: 51.12cm x 66.52cm
Producer: Big Ben, MB Puzzles
Notes: The Palace of Fine Arts in the Marina District of San Francisco, California, is a monumental structure originally constructed for the 1915 Panama-Pacific Exposition  in order to exhibit works of art presented there. One of only a few surviving structures from the Exposition, it is the only one still situated on its original site. It was rebuilt in 1965, and renovation of the lagoon, walkways, and a seismic retrofit were completed in early 2009.

Built around a small artificial lagoon, The Palace of Fine Arts is composed of a wide, 1100 foot pergola, an arch formed by rows of Corinthian columns framing a wide walkway, around a central rotunda situated by the water. The lagoon was intended to echo those found in classical settings in Europe, where the expanse of water provides a mirror surface to reflect the grand buildings and an undisturbed vista to appreciate them from a distance.

Ornamentation includes Bruno Louis Zimm’s three repeating panels around the entablature of the rotunda representing “The Struggle for the Beautiful” symbolizing Greek culture, while Ulric Ellerhusen supplied the weeping women atop the colonnade and the sculptured frieze and allegorical figures representing Contemplation, Wonderment and Meditation.

The underside of the Palace rotunda’s dome features eight large insets, which originally contained murals by Robert Reid. Four of the murals depicted the conception and birth of Art, “its commitment to the Earth, its progress and acceptance by the human intellect,” and four depicted the “golds” of California (poppies, citrus fruits, metallic gold, and golden wheat). [Wiki]