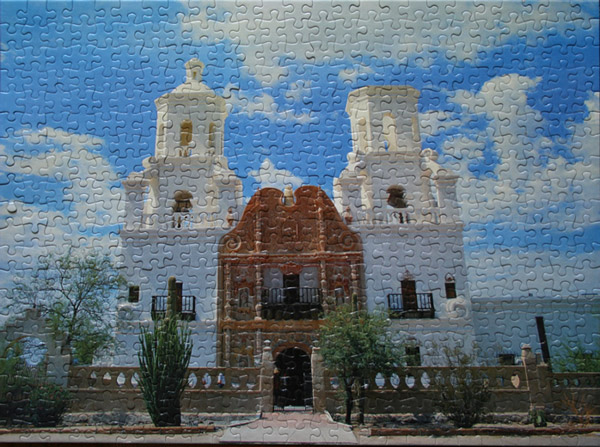 Size: 500 pieces
Dimensions: 48.26 cm x 35.56 cm
Producer: The Canadian Group, Sure-Lox, Impressions series
Notes: Mission San Xavier del Bac is a historic Spanish Catholic mission located about 16 km south of downtown Tucson, Arizona, on the Tohono O’odham San Xavier Indian Reservation. Named for a pioneering Christian missionary and co-founder of the Society of Jesus (Jesuit Order), the Mission is also known as the “place where the water appears,” as there were once natural springs in the area. The Santa Cruz River which now runs only part of the year is also nearby. The Mission is situated in the center of a centuries-old Indian settlement of the Tohono O’odham (formerly known as Papago), located along the banks of the Santa Cruz River. [Wiki]