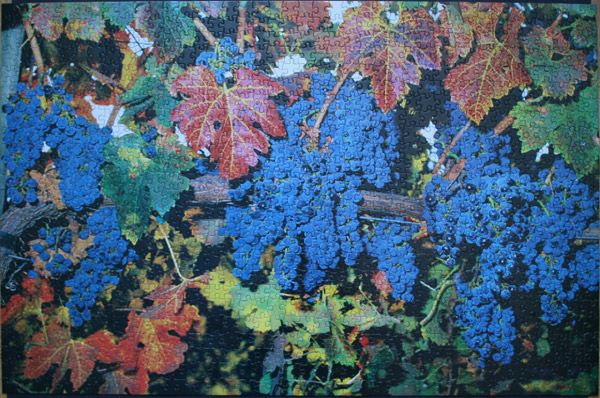 Size: 1000 pieces
Dimensions: 73cm x 48.57cm
Producer:  Sure-Lox, Puzzlers Collection series
Notes: Cabernet Sauvignon is one of the world’s most widely recognized red wine grape varieties. It is grown in nearly every major wine producing country among a diverse spectrum of climates from Canada’s Okanagan Valley to Lebanon’s Beqaa Valley. Cabernet Sauvignon became internationally recognized through its prominence in Bordeaux wines where it is often blended with Merlot and Cabernet Franc. From France, the grape spread across Europe and to the New World where it found new homes in places like California’s Napa Valley, Australia’s Coonawarra region and Chile’s Maipo Valley. For most of the 20th century, it was the world’s most widely planted premium red wine grape until it was surpassed by Merlot in the 1990s.  [Wiki]

Napa County is a county located north of the San Francisco Bay Area in the U.S. state of California. The word napa is of Native American derivation. Of the many explanations of the name’s origin, the most plausible seems to be that it is derived from the Patwin word “napo” meaning “house”, although local residents will often cite an urban legend that gives the translation as “you will always return”. [Wiki]