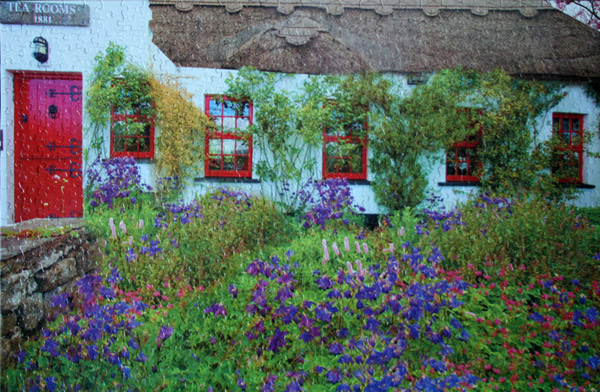 Size: 750 pieces
Dimensions: 59.7 cm x 39.4 cm
Producer: The Canadian Group, Sure-Lox
Notes: A tea house or tearoom is a venue centered on drinking tea. Its function varies widely depending on the culture, and some cultures have a variety of distinct tea-centered houses or parlors that all qualify under the English language term “tea house” or “tea room.”

Tea drinking is a pastime closely associated with the English.  Tea first arrived in England during Cromwell’s protectorate and soon became the national drink. Tea drinking became a national pastime for the English. As early as 1784, Rochefoucauld noted that “[t]hroughout the whole of England the drinking of tea is general”. Nevertheless, Anna Russell, Duchess of Bedford, was credited with the invention of afternoon tea in 1840. It spread to other parts of English society by 1864, when the female manager of London’s Aerated Bread Company is attributed with innovating the first commercial public tearoom. [Wiki]