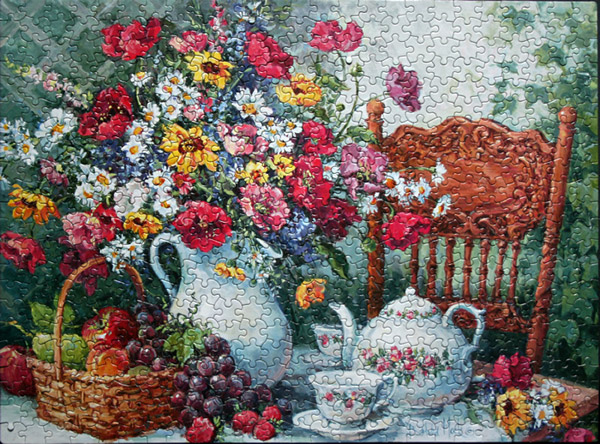 Size: 500 pieces
Dimensions: 45.72cm x 60.96cm
Producer:  Karmin International
Painting: photo
Artist: Barbara Mock
Notes: Afternoon tea traditionally known as low tea, is a light meal snack typically eaten between 2pm and 5pm. The custom of drinking tea originated in England when Catherine of Braganca married Charles II in 1661 and brought the practice of drinking tea in the afternoon with her from Portugal. Various places that belonged to the former British Empire also have such a meal.

Traditionally, loose tea is brewed in a teapot and served in teacups with milk and sugar. This is accompanied by sandwiches (customarily cucumber, egg and cress, fish paste, ham, and smoked salmon), scones (with clotted cream and jam) and usually cakes and pastries (such as Battenberg, fruit cake or Victoria sponge). In hotels and tea shops the food is often served on a tiered stand; there may be no sandwiches, but bread or scones with butter or margarine and optional jam or other spread, or toast, muffins or crumpets. [Wiki]