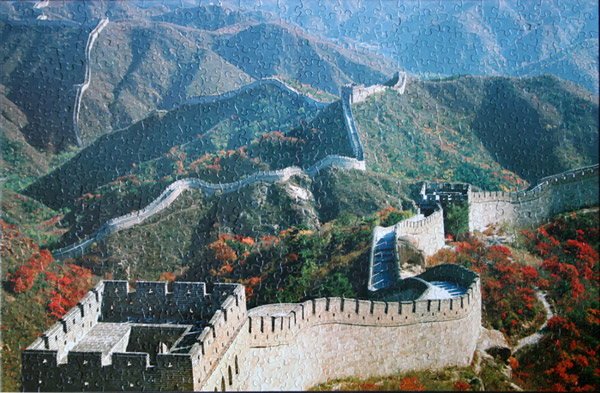 Size: 750 pieces
Dimensions: 59.7 cm x 39.4 cm
Producer: Sure-Lox, Impressions
Notes:  The Great Wall of China is a series of stone and earthen fortifications in northern China, built originally to protect the northern borders of the Chinese Empire against intrusions by various nomadic groups. Several walls have been built since the 5th century BC that are referred to collectively as the Great Wall, which has been rebuilt and maintained from the 5th century BC through the 16th century. One of the most famous is the wall built between 220–206 BC by the first Emperor of China, Qin Shi Huang. Little of that wall remains; the majority of the existing wall was built during the Ming Dynasty.

The Great Wall stretches from Shanhaiguan in the east, to Lop Lake in the west, along an arc that roughly delineates the southern edge of Inner Mongolia. The most comprehensive archaeological survey, using advanced technologies, has concluded that all the walls measure 8,851.8 km. This is made up of 6,259.6 km sections of actual wall, 359.7 km of trenches and 2,232.5 km of natural defensive barriers such as hills and rivers. [Wiki]