Puzzle: The Unicorn by Myles Pinkney 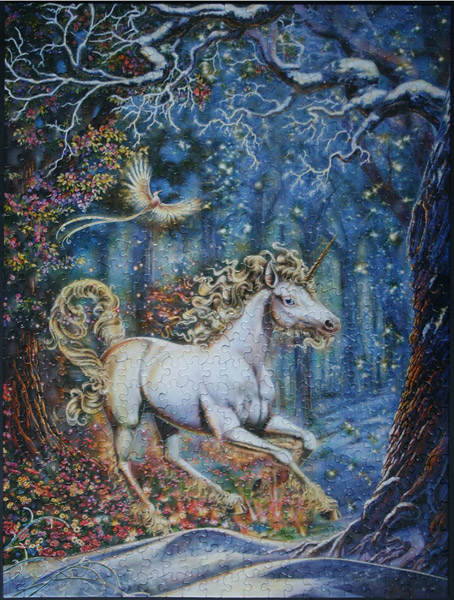 Size: 550 pieces
Dimensions: 61cm x 46cm
Producer: Ceaco, Glow in the Dark series
Artist: Myles Pinkney
Box: photo
Notes: A unicorn (from Latin unus ‘one’ and cornu ‘horn’) is a mythological creature described as having a long, straight horn extending from its forehead. Though the modern popular image of the unicorn is sometimes that of a horse differing only in the horn, the traditional unicorn also has a billy-goat beard, a lion’s tail, and cloven hooves—these distinguish it from a horse. Marianna Mayer has observed (The Unicorn and the Lake), “The unicorn is the only fabulous beast that does not seem to have been conceived out of human fears. In even the earliest references he is fierce yet good, selfless yet solitary, but always mysteriously beautiful. He could be captured only by unfair means, and his single horn was said to neutralize poison.” [Wiki]