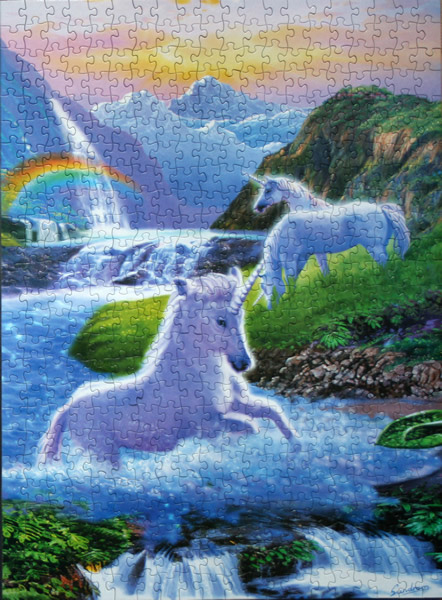 Size: 500 pieces
Dimensions: 48.26 cm x 35.56 cm
Producer: The Canadian Group, Sure-Lox, Keepsakes series, Reusable gift box with magnetic closure, #42220-4
Artist: Steve Sundram
Notes: The unicorn is a legendary animal commonly portrayed as a white horse with a goat’s beard and a large, pointed, spiraling horn projecting from its forehead. First mentioned by the ancient Greeks, it became the most important imaginary animal of the middle ages and Renaissance when it was commonly described as an extremely wild woodland  creature, a symbol of purity and grace, which could only be captured by a virgin. In the encyclopedias its horn was said to have the power to render poisoned water potable and to heal sickness. Until the 19th century, belief in unicorns was widespread among historians, alchemists, writers, poets, naturalists, physicians, and theologians. [Wiki]