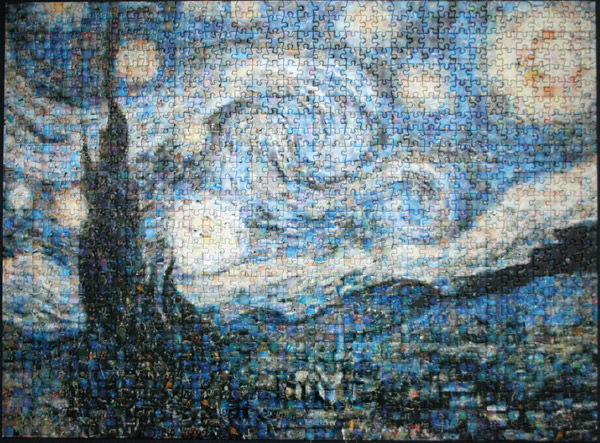 Size: 1000 pieces
Producer:  Buffalo Games, Robert Silvers
Artist: Vincent Willem van Gogh (1853 – 1890) was a Dutch post-Impressionist painter whose work had a far-reaching influence on 20th century art for its vivid colors and emotional impact. [Wiki]
Painting: photo. “The Starry Night” depicts the view outside his sanatorium room window at night, although it was painted from memory during the day.  The center part shows the village of Saint-Rémy under a swirling sky, in a view from the asylum towards north. The Alpilles  far to the right fit to this view, but there is little rapport of the actual scene with the intermediary hills which seem to be derived from a different part of the surroundings, south of the asylum. The cypress tree to the left was added into the composition. [Wiki]
Notes: Mosaics, one of the oldest forms of surface decoration, date back to the 4th-3rd millennium BC. Mosaics take on a painted effect by forming pictures or patterns from compositions of small pieces of various colored materials (glass, stone, ceramics, metals, etc.). The most well known mosaics were produced during the Byzantine Empire (4th to6th century) in Ravenna, Italy.  Today, in the age of computers, mosaics have taken on a new form. In 1995 Rob Silvers utilized computers to combine thousands of photographs to make digital mosaics. [Buffalo Games site]