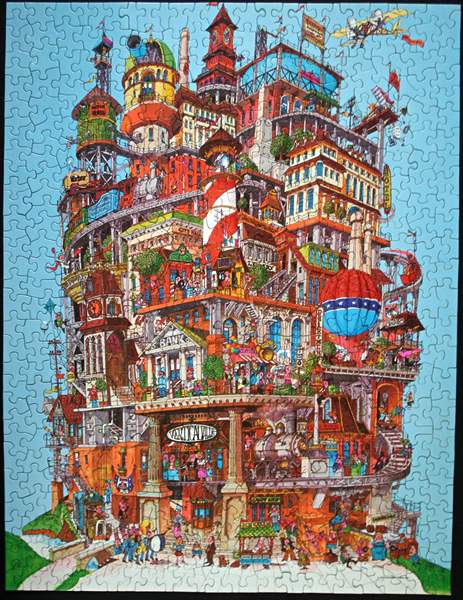 There’s a town west of someplace and south of some other,
That isn’t like anyplace else anywhere.
It didn’t grow outward like all other cities;
It rose like a mountain straight up in the air.

The blocks of most towns lie beside one another,
And to get “there” from “here” you just go across town,
But this is a place where the blocks stack like pancakes,
Where uptown is up, and where downtown is down!

It has its own railroad that spirals up through it,
A Penny Arcade where the kids test their skill,
A bank for high finance, a pool for high diving,
They’re tops with the people in Verticalville.

The mayor, Mr. Height’s, running for re-election,
On a platform that calls for more vertical blocks,
Continued high spirits and low unemployment,
And a new baseball park for the Vertical Sox!

There’s a plane flying ’round saying, “Don’t eat at Joe’s,”
Which was rented, of course, by the owner of Bill’s.
And Bruce the Balloonist is ready to lift off
To give all the people some vertical thrills.

If you come to this town, you don’t need a compass;
It takes an altimeter to fill the bill.
But spirits are high and the living is lofty.
The folks live it up, up in Verticalville.