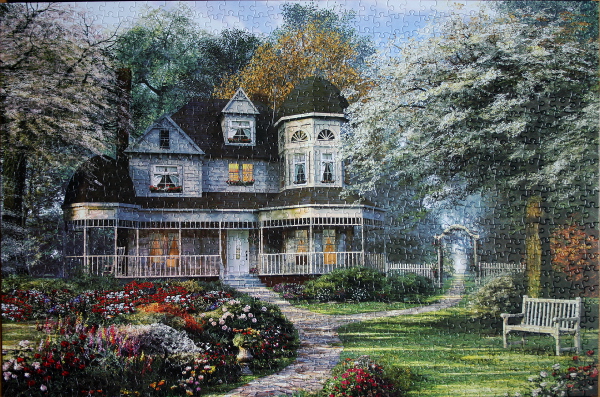 Puzzle: A serene puzzle, with all its trees and flowers in bloom, and invitingly lit manor windows. Good places to start are the manor itself, the roads, fence and bench, grass, and the tree trunk on the right. Flower patch, pieces of sky, and tree leaves and branches can come next – since the tree leaves on the four trees are of different colours, this part is not difficult.

Notes: Victorian architecture is architectural style during the middle and late 19th century. The name “Victorian” refers to the reign of Queen Victoria, 20 June 1837 – 22 January 1901, during which period the styles known as Victorian were used in construction. However, many elements of what is typically termed “Victorian” architecture did not become popular until later in Victoria’s reign. The styles often included interpretations and eclectic revivals of historic styles mixed with the introduction of middle east and Asian influences. The name represents the British and French custom of naming architectural styles for a reigning monarch. [Wiki]