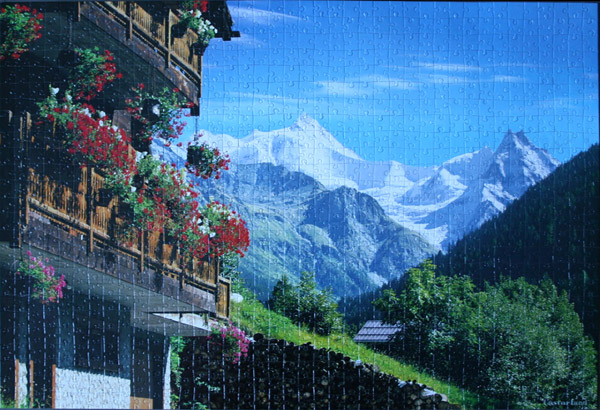 Size: 1000 pieces
Dimensions: 68 cm x 47 cm
Producer: Castorland Puzzle
Notes: The Zinalrothorn (4,221 m) is a mountain in the Pennine Alps in Switzerland. Its name comes from the village of Zinal lying on the north side and from the German word Rothorn which means Red Peak. When it was first climbed in 1864 the mountain was known locally as Moming. [Wiki]

The wide, glacial Rhône valley dominates the area. There are many side valleys which branch off the main valley. These vary from narrow and remote to reasonably populous and popular. At the head of the Mattertal valley lies Zermatt, a pretty tourist village dominated by views of the Matterhorn (4,478 m). Fifty of the mountains exceed 4,000 m with the highest, Monte Rosa, reaching to 4,638 metres, and there are numerous glaciers including several of the largest in the Alps. [Wiki]