Efficiency Dance Bolting and fungi in a permaculture garden

Bolting and fungi in a permaculture garden

This morning, before the +40°C weather hit, I put out some more egg shells into the garden to discourage snails from chewing through the leaves, and sprayed the plants with the jalapeño infused water, to deter squirrels. Not five minutes after I have sprayed, a neighbour of the squirrel persuasion came to visit. It circled the garden perimeter on the fence, sniffing suspiciously, and decided the garden did not hold any bounty of interest. I’ll take it as a good sign.

Before spraying, I have poked at a few more radishes on top of Tower 4, and pulled out those that either looked ready or threatening to become inedible hard roots. There shall be a salad tonight. 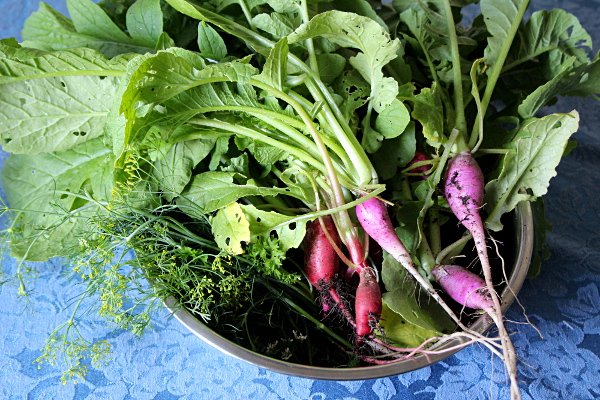 It has been very hot for the past few days. We have spent quite a bit of that time at a beach or relaxing inside, and during that time, our cilantro appears to have bolted (which means the flowers are out and the plant is going to seed). Unfortunately, it grows best in cool, moist environments and does not like hot weather much. (Welcome to my garden of 10+ hours of hot burning sun every day, dear cilantro.) This is the exact same experience I have had last year. Shade did not prevent this rapid flowering. So, sadly, cilantro leaves are no longer flavourful, and the only thing to do is to let it go to seed. I think next time I shall plant it in the ground, as opposed to a tower, so that it can easily self sow.

One of the two dill plants has gone to flower as well. I have gathered up the stalks with the flowers to preserve for the pickling time. Dill will likely be another plant I would like to move outside the tower. Interesting thing I have learned, is that dill and fennel will cross-pollinate, creating less-than-optimal results for both plants. I shall keep that in mind if I am ever to introduce fennel into the equation. I will still plant dill and basil in close proximity with tomatoes, as they act as pesticides keeping tomato horn worms away.

One of the grape vines worries me as well (not that it ever gives any fruit, it just grew in the garden without any encouragement on our part): it has light green spots on the leaves, and some leaves are curling and have dried-out regions. After a bit of investigation, I think the vine has been chosen as home by downy mildew. Most sites do not list natural ways to deal with it: controlling it includes selection of the spot to plant the vine and picking a resistant genetic variant (since it just sprouted on its own, no input had been possible on our end) or applying pre-infection fungicides (which we have not done) or, less effectively, post-infection fungicides. As we do not want to spray anything toxic, I welcome alternative suggestions on how to approach this.

It looks like very hot days this week, with thunderstorms promised tomorrow (truly an Ottawa Canada day: go outside for a certainty to get burned and a chance to get struck by lightning), so I shall leave the harvest of greens until the plants can drink in the sunlight and the rain.