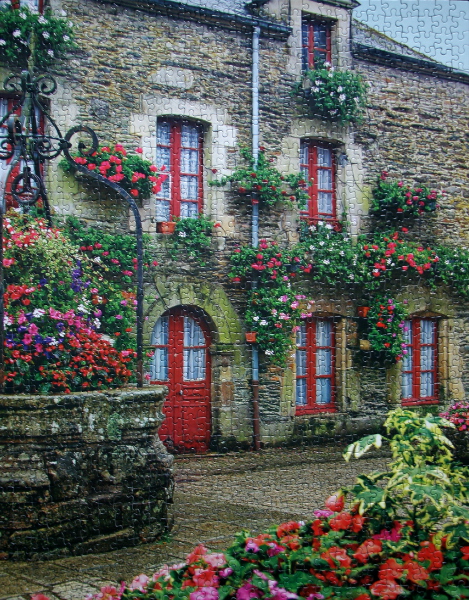 Size: 1000 pieces
Dimensions: 51.12cm x 66.52cm
Producer: Hasbro, MB Puzzles, Big Ben, 2005, #04962-G52
Puzzle: A pleasant puzzle to do, for stone parts good lighting is a plus. A good place to start are the windows and the door as well as the large bright flowers and leaves in the bottom right and the border of the roof and the sky. After that, the window borders, the water pipe, and the iron structure in the top left can serve as guides. Flowers and the rest of the stone work can follow. Not a completely trivial puzzle, but quite enjoyable.

Brittany is one of the 27 regions of France. It occupies a large peninsula in the northwest of the country, lying between the English Channel to the north and the Bay of Biscay to the south. Its capital is Rennes. The name of Brittany derives from settlers from Great Britain, who fled that island in the wake of the Anglo-Saxon conquest of England between the fifth and seventh centuries. [Wiki]