After some time we had without power, I refused to go back to the electronic world. Instead, I took the baby into the garden, and she happily played while I dodged tomato branches and searched for hidden ripe treasures in the jungle that my garden has become. In the process, I have discovered a ripe red Romanian pepper, quite a few Thai hot peppers – still green but promising, two surprise butternut squashes (and by “surprise” I mean that as I was looking for tomatoes, I have bumped into a squash hanging from a tower), lots of kale, and an abundance of scarlet runner bean pods.

My tomato jungle did not disappoint. I have discovered lots of tiny red grape tomatoes, larger red cherry tomatoes, tiny yellow tomatoes, plum tomatoes, and large red tomatoes. Lots are still in the ripening stage, but I was able to gather about a bowl and a half just by picking those that were already so ripe they couldn’t hang on anymore. Quite a few overripe tomatoes are on the ground – the sacrifice to the fauna of the garden, which is joyfully munching on the cast-aways. 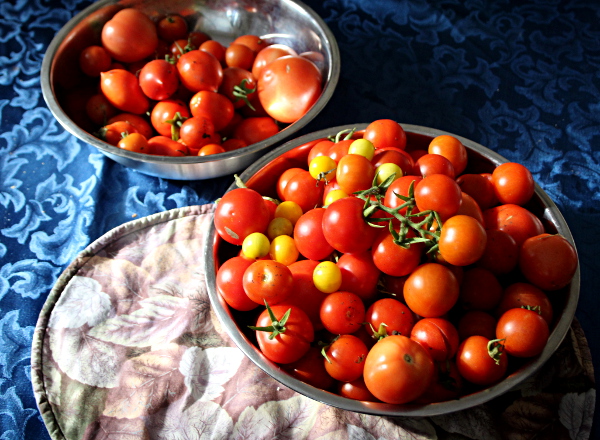 The birds have discovered the bird feeder and made it their own. Not a day goes by without me seeing quite a few there, happily partaking in the sunflower seeds. Some of the plants are trying to bail from the garden: the beans, the tomatoes, and a squash have surpassed the boundaries and are running wild on the other side of the fence. Surprisingly enough, people who cut grass in the common area have been very gentle so far and have worked around the escapees.

As I was making my way around the towers, I have brushed against the lemongrass, and  does it ever smell divine! I don’t know if it has been effective at keeping undesirable insects from the garden, as advertised, but it sure smells good. We shall see how it fares in a Tom Kha Gai soup once the harvest time is on.

For now, I had quite a few tomatoes to make use of, and so I decided to make a cold tomato soup. My son helped me sort through the tomatoes, keeping the whole ones for future use and getting the split ones washed and cut up for the soup. The recipe is simple, and I just winged it as I went, putting in whatever compatible veggies I had in the fridge. 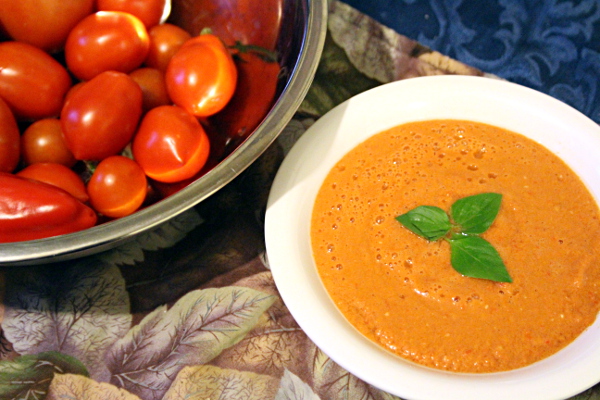 I have blended everything together in two batches in my Blendtec mixer, added basil leaves from the garden for garnish and some salt and fresh-ground black pepper to taste. This made a refreshing cold soup for a lazy summer afternoon. In fact, I just had some today for lunch, and I must say – it keeps well in the fridge overnight.

So far this summer of gardening has been very rewarding.