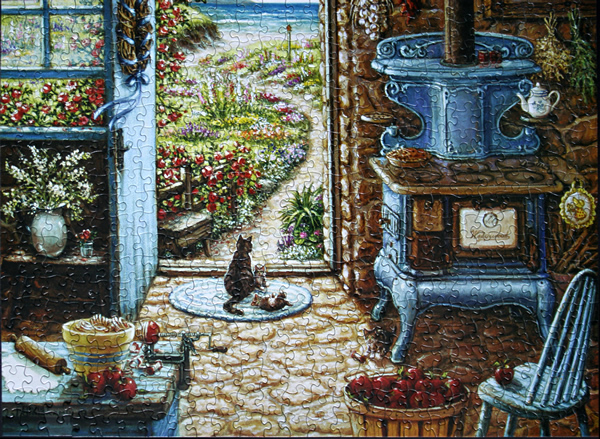 Puzzle: I have started this one with the blue regions: the door, the stove, the rug, and the chair. Window frame, white flowers in the vase, red apples, bowl on the table, the vase, the plaque on the stove, and the garden path are smaller self-contained regions. The flower garden and the light part of the floor easily fall into place, and the brown under the vase and all around and on the stove are the more subtle parts left over. Not a hard puzzle to do, it helps to have natural light at the end. The puzzle includes a shortbread cookies recipe and a red puzzle piece cookie cutter.

Stove: The Old English word stofa meant any individual enclosed space, such as a room, and ‘stove’ is still occasionally used in that sense, as in ‘stoved in’. Until well into the 19th century ‘stove’ was used to mean a single heated room, so that Joseph Bank’s assertion that he ‘placed his most precious plants in the stove’ or Rene Descarte’s observation that he got ‘his greatest philosophical inspiration while sitting inside a stove’ are not as odd as they first seem.

In its earliest attestation, cooking was done by roasting meat and tubers in an open fire. Pottery and other cooking vessels may be placed directly on an open fire, but setting the vessel on a support, as simple as a base of three stones, resulted in a stove. The three-stone stove is still widely used around the world. In some areas it developed into a U-shaped dried mud or brick enclosure with the opening in the front for fuel and air, sometimes with a second smaller hole at the rear. [Wiki]