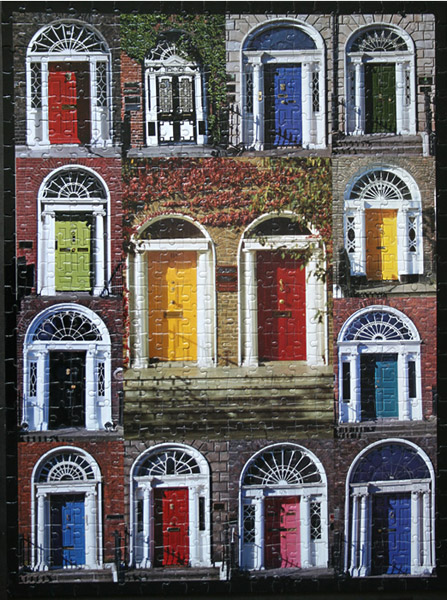 Size: 500 pieces
Notes: I brought this puzzle with me from Ireland in 2008. I do not have a record of the producer of the puzzle as I do not have the box anymore. A clarification is welcome – if you have any clue as to the details regarding this puzzle, I would much appreciate that information.

“If you’ve taken an escorted tour of Dublin you might have been told by your guide that the famous writer George Moore lived next to another famous writer, Oliver St John Gogarty, in Ely Place. Both were a bit eccentric and it’s said that Moore painted his door green so that the drunken Gogarty would not come knocking on it, thinking it to be his own door. Gogarty then painted his door red so that the drunken Moore would not come knocking on his door! And that’ supposedly is what started the fashion. The truth is a lot less colourful.

According to the history books, George Moore was generally abstemious, drinking only a little wine with dinner and repelled by displays of public drunkeness. More relevant to our story however, was that George’s home and those of his neghbours were built in the Georgian style and the exteriors had to adhere to strict architectural guidelines. In order to set themselves apart, the former residents of Georgian Dublin painted their front doors whatever color they fancied (“red was more durable”), added ornate knockers, elegant fanlights above the door, and wrought iron boot scrapers, near the the entrance. Decorated iron coal-hole covers were often embedded in the pavement. Today, most of the houses have their original fanlights, some still with box shaped glass recesses in which a lamp would have been placed. There are also examples of a simple security device in the form of a fan-shaped arrangement of spikes set into the wall beside a window to foil burglars. Sometimes a similar device was inserted inside the fanlight.” [Irish culture and customs site]