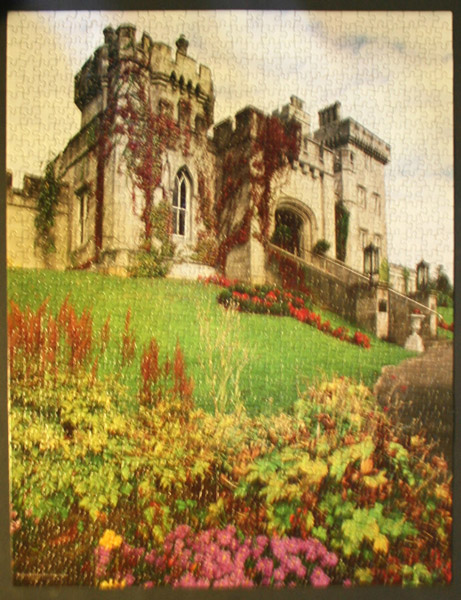 Size: 1000 pieces
Dimensions: 51.12cm x 66.52cm
Producer: Big Ben
Location: Dromoland Castle is a castle, now a luxury hotel, located near Newmarket-on-Fergus, County Clare, Ireland. The present building was completed in 1835. However the first building constructed here seems to have been a 15th or early 16th century tower house and is recorded as being erected by Thomas, the son of Shane Mac Anerheny. There were at least three houses on the site, at various times, called Dromoland. While Dromoland later became residence of eight generations of the O’Brien family, early records suggest that the area was also occupied by other local Gaelic families, such as the McInerney family during the 16th century. According to the historian James Frost, Dromoland translates as the “Hill of Litigation”.

Dromoland has been preserved with little change since 1855. The mansion is in “baronial” or “gothic revival” style. It has four linked irregular castellated  turrets. A gothic porch to the north front displays the O’Brien arms. The western portion faces out to the lake, and the east towards the hill where Thomond House now stands. The large walled gardens are to the south. In 1902 the 15th Baron Inchiquin, Lucius, took the old 17th century gateway from Leamaneh and erected it at the entrance to the large walled garden. A long curving drive leads from the gateway and classical lodge, passing north of the lake and round to the front door of Dromoland Castle. [Wiki]