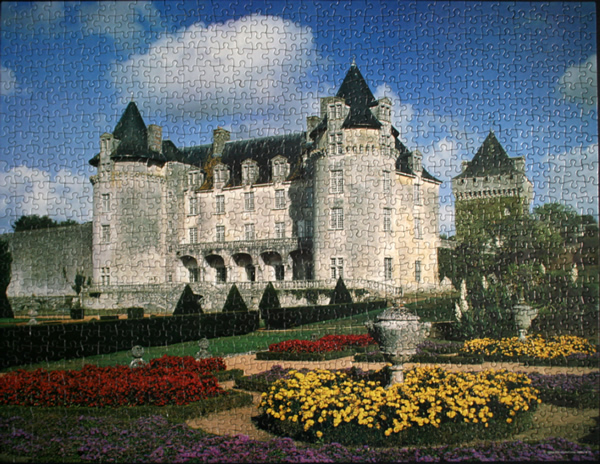 Notes: Chateau de la Roche Courbon is a large chateau, developed from an earlier castle, in the Charente-Maritime departement of France. It is in the commune of Saint-Porchaire between Saintes and Rochefort.

A castle was built around 1475 by Jehan de Latour, on site which had been inhabited since prehistoric times. In the 17th century, the Courbon family, which had occupied the castle for two centuries, transformed it into a more comfortable residence. More alterations were made in the 18th century, but it was eventually sold in 1817 and then abandoned. It was purchased in 1920 by Paul Chenereau, who restored the chateau and its gardens. The chateau is still owned and inhabited by his descendants.

The gardens include orchard, flower garden, geometrical flower beds and lawns surrounding a small lake (‘mirror pool’). The River Bruant flows through the gardens, feeding the water features. Beyond that, an ornamental staircase leads to higher ground, on the far side of the river. [Wiki]