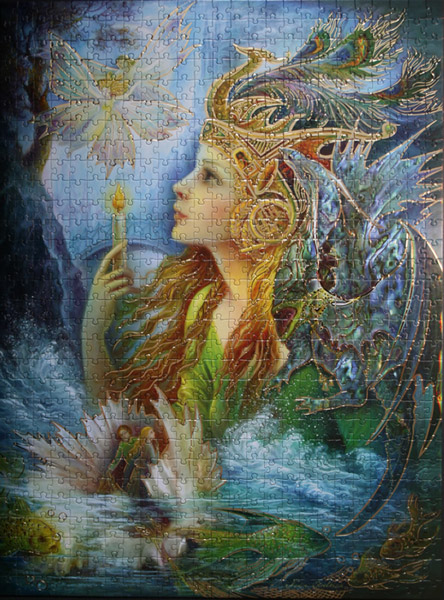 Size: 750 pieces
Dimensions: 51cm x 68cm
Producer: Lafayette Puzzle Factory, Goldenline Fairies series, #3921
Artist: Nadia Strelkina
Painting: photo
Box: photo
Notes: Within a work of fantasy, magic can function to move the plot forward, providing both power for the hero of the story and power for those who oppose him/her. The use of magic is often transformative of the character, if not the world.

In order to carry out this function, magic often carries a price, equal to its value.

In most fantasy works, magic is either depicted as an innate talent, is acquired through studying, or is given to someone who makes a pact, usually with a devil, spirit or other sorcerer.

Sometimes, too, a place will have magic; perhaps a certain location is “close to the spirit realm” or there are residues from powerful spells once cast there, or a place is magical by nature, as in the case of an enchanted forest. One such magical place is Faerie or Elfland. Its location may not be fixed — in some cases it acts as a parallel world — but magic is both found and occurs there. [Wiki]