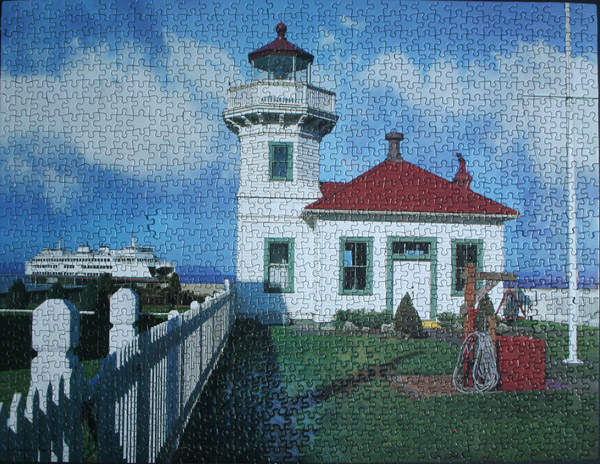 Size: 1000 pieces
Dimensions: 51.12cm x 66.52cm
Producer: Big Ben, MB Puzzles
Notes: The Mukilteo Light at Mukilteo, Washington is an operational lighthouse with non-rotating fresnel lens. It originally had a revolving Fresnel lens until 1927, when it was replaced with a fixed lens. [Wiki]

In 1792, Captain George Vancouver mapped the Puget Sound area (named after Lieutenant Peter Puget), landing on the point where the light station stands today, Captain Vancouver designated the area as Rosehill Point because of the beautiful wild roses that cover the hillsides.

Since 1906 there have been 18 official lighthouse keepers assigned to the Mukilteo Light Station. A plaque commemorating all but the last keeper can be found on the lighthouse wall. Due to its location and amenities, the light station was considered a choice assignment that was often given to keepers as a reward for outstanding service. The keeper and his assistant maintained a constant six hour shift rotation to keep the light operational until electricity arrived in 1927. [Mukilteo Historical Society site]