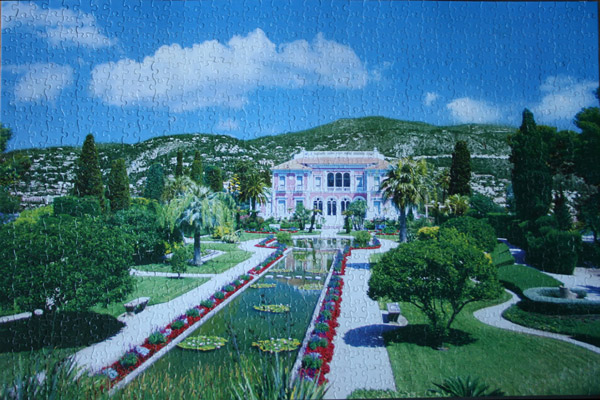 Size: 1000 pieces
Dimensions: 73cm x 48.6cm
Producer: The Canadian Group, Sure-Lox
Notes: The Paradise garden is a form of garden, originally just paradise, a word derived from the Median language, or Old Persian. Its original meaning was “a walled-in compound or garden”.

The paradise garden takes some of its character from its original arid or semi-arid homeland. The most basic feature is the enclosure of the cultivated area. This excludes the wildness of nature, and includes the tended, watered greenery of the garden. The commonest and easiest layout for the perimeter walls is that of a rectangle, and this forms one of the prime features of this kind of garden. Another common theme is the elaborate use of water, often in canals, ponds or rills, sometimes in fountains, less often in waterfalls of various kinds.

The rectangular or rectilinear theme of the garden is often extended to the water features, which may be used to quarter the garden. This layout is echoed in the four rivers of the Garden of Eden, and much of the use and symbolism of the paradise garden is derived from this connection. The contrast between a formal garden layout with the informality of free-growing plants provides a recurring theme to many paradise gardens. [Wiki]