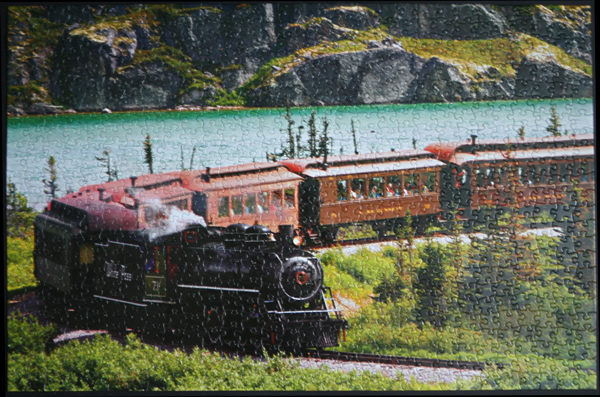 Puzzle: I found it easiest to start from the water and the clear line between the water and the rocks to define a horizontal guide. From that point on, the railroad, the black locomotive, the carriages, and various green and rocky regions are equally logical to do, since not many of them provide an easily-delineated coloured region. This puzzle benefits from good lighting.

Steam Engine: A steam engine is a heat engine that performs mechanical work using steam as its working fluid.

Using boiling water to produce mechanical motion goes back about 2,000 years, but early devices were not practical. Since the late 1700s steam engines have become a major source of mechanical power. The first applications were removing water from mines. In 1781 Watt patented a steam engines that produced continuous rotative motion. Steam engines could also be applied to vehicles such as traction engines and the railway locomotives which are commonly just called steam engines ouside America. The stationary steam engine was an important component of the Industrial Revolution, overcoming the limitations imposed by shortage of sites suitable for water mill and allowing factories to locate where water power was unavailable. [Wiki]