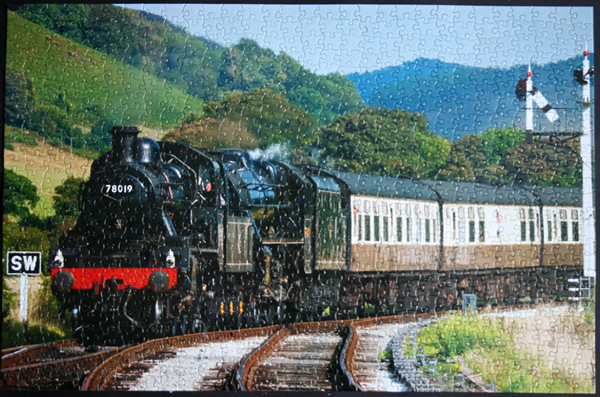 Puzzle: The blue of the sky and the mountains are an easy starting point, followed by the black-and-red locomotive, the SW sign, and the repetitive-window carriages of the train, and the bottom branching of the rails with white regions. Green and beige slopes on the left are logical stand-alone regions, and the rest of the mountain, grassy right-bottom corner, and rails and wheels can be filled out afterwards. Overall a pleasant puzzle not requiring much effort.

Locomotive: A steam locomotive is a railway locomotive that produces its power through a steam engine. These locomotives are fueled by burning some combustible material, usually coal, wood or oil, to produce steam in a boiler, which drives the steam engine. Both fuel and water supplies are carried with the locomotive, either on the locomotive itself or in wagons pulled behind.

Steam locomotives were first developed in Britain and dominated railway transportation until the middle of the 20th century. From the early 1900s they were gradually superseded by electric and diesel locomotives. [Wiki]