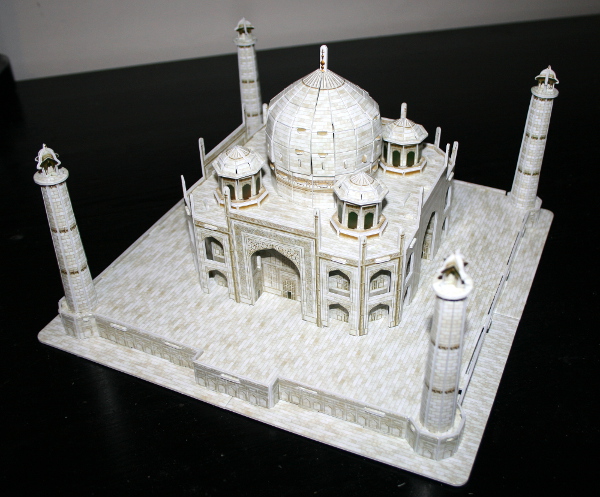 Puzzle: Following the St. Basil’s Cathedral puzzle, I have gone on a search for other higher-complexity puzzles made by CubicFun, and found a couple in a nearby toy store (Mrs. Tiggy Winkles). The only two they had were the Taj Mahal and the Eiffel Tower. As I’m not a big fan of modern architecture, I got the Taj Mahal one and have opened it the same night. Less complex than St. Basil’s Cathedral, it was still a lot of fun to put together. 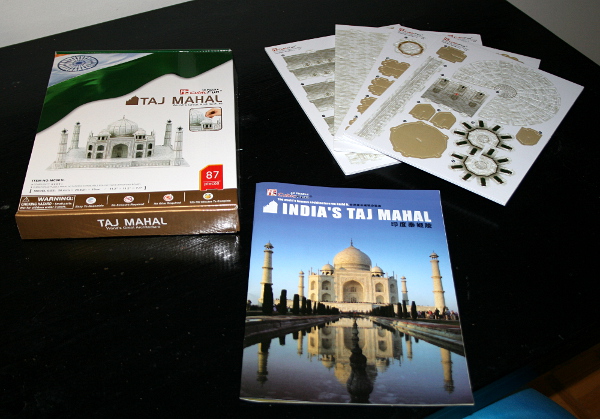 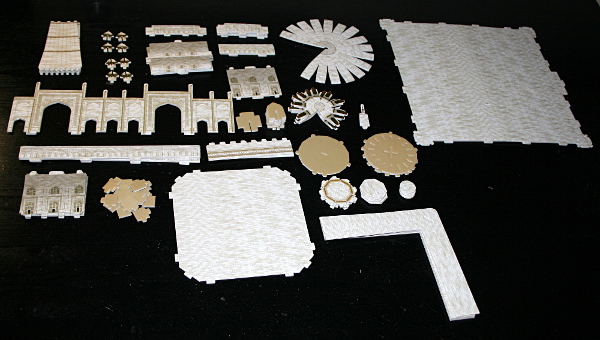 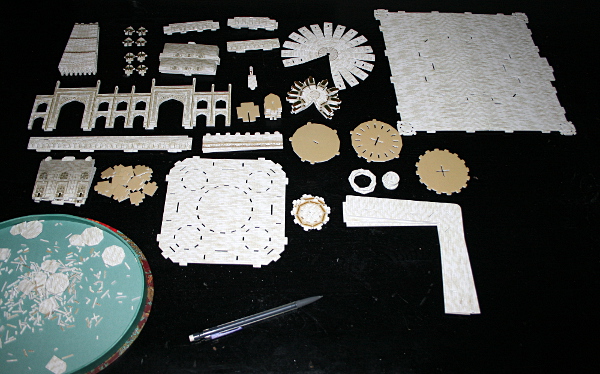 3. And putting together the puzzle itself. Below are the progress photos (this time I had enough willpower to stop briefly to snap a few photos): 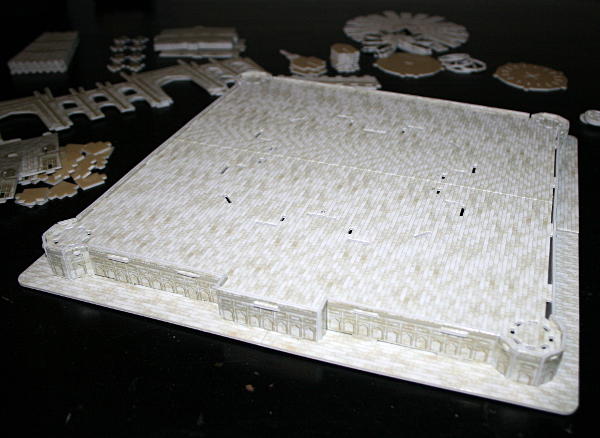 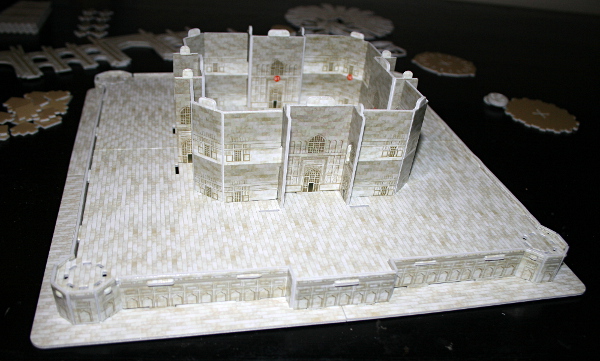 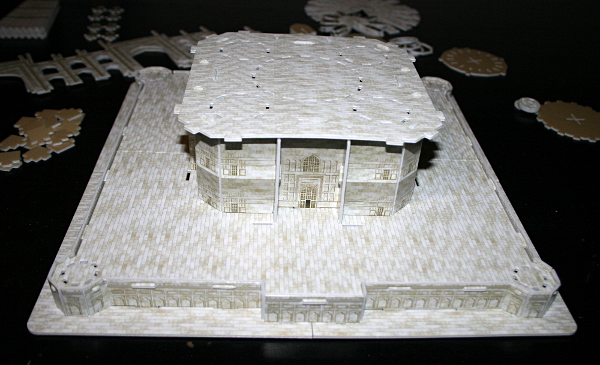 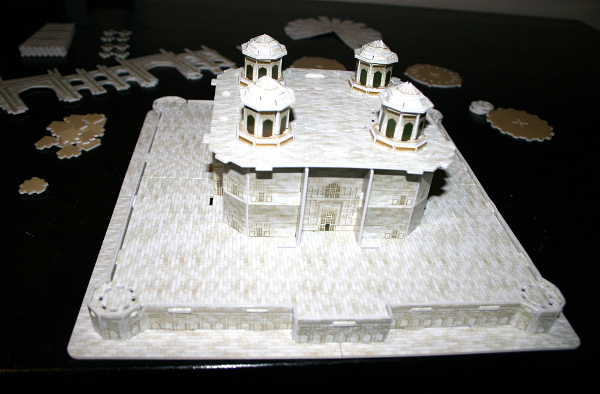 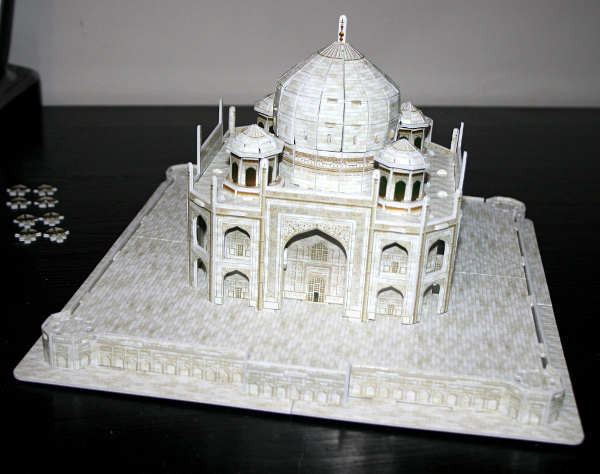 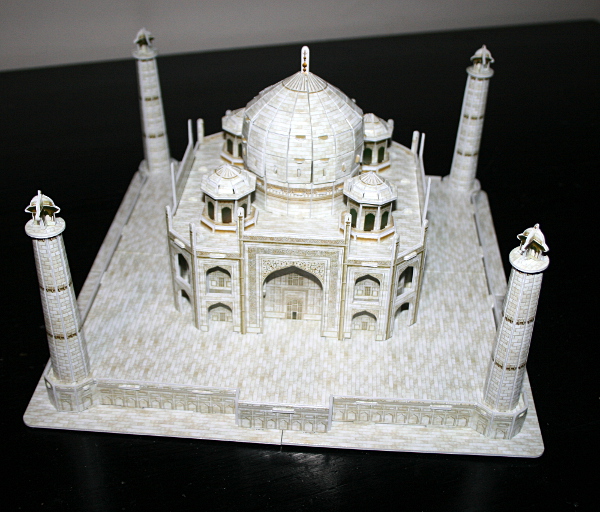 Overall a pleasant puzzle to do. I have aired the sheets overnight and did not have a reaction to the material this time, as I did with the St. Basil’s cathedral. Once the pieces were separated and the holes punched through, the assembly took less than 1.5 hours. I will definitely be looking for more puzzles made by this company.

“The world’s famous architecture we build it. India’s Taj Mahal.

The Taj Mahal, it is well-known, was built by the Mughal Emperor Shah Jahan in the memory of his Empress Mumtaz Mahal. As symbols of undying love go, it is one of the most deservedly famous and best examples of unparalleled excellence in Indo-Persian architecture.

Taj Mahal is regarded as one of the eight wonders of the world, and some Western historians have noted that its architectural beauty has never been surpassed. The Taj is the msot beautiful monument build by the Mughals, the Muslim rulers of India.

The Taj Mahal (also “the Taj”) is considered the finest example of Mughal architecture, a style that combines elements from Persian, Turkish, Indian, and Islamic architectural styles. In 1983, the Taj Mahal became a UNESCO World Heritage Site and was cited as “the jewel of Muslim art in India and one of the universally admired masterpieces of the world’s heritage”.

While the white domed marble and tile mausoleum is most familiar, Taj Mahal is an integrated symmetric complex of structures that was completed around 1648. Ustad Ahmad Lahauri is generally considered to be the principal designer of the Taj Mahal.

In 1631, Shah Jahan, emperor during the Mughl empire’s period of greatest prosperity, was griefstricken when his third wife, Mumtaz Mahal, died during the birth of their fourteenth child, Gauhara Begum. The court chronicles of Shah Jahan’s grief illustrates the love story traditionally held as an inspiration of Taj Mahal. The construction of Taj Mahal begun soon after Mumtaz’s death with the principal mausoleum completed in 1648. The surrounding buildings and garden were finished five years later.

After his wife’s death, Shah Jahan gave up most of the pleasures and comforts that his royal position brought him. He had always had an avid interest in architecture, and now thought of erecting a commemorative monument in his queen’s memory. A one of a kind monument of such remarkable beauty that it would last over the centuries and awe all lokers.

Shah Jahan has planned to build a tomb for himself that would be a twin to the Taj Mahal, only in black marble, on the exact opposite side of the Yamuna and connected to the Taj with a marble bridge. But before his project was launched, he was over-thrown from power by his son Aurangzeb and imprisoned. He spent his last years in confinement in the Red Fort from where he could gaze at the Taj Mahal.

Four minarets, one at each corner of the plinth, facing the chamfered corners, frame the tomb.

The focus of the Taj Mahal is the white marble tomb, which stands on a square plinth consisting of a symmetrical building with an iwan, an arch-shaped doorway, topped by a large dome.

Archaeological Survey of India interprets that the Yamuna itself was incorporated into the garden’s design and was meants to be seen as one of the rivers of Paradise.

The Taj Mahal complex is bounded by crenellated red sandstone walls on three sides with river-facing side open.

There are two grand red sandstone buildings. The western building is a mosque and its opposite is the jawab.

The dome is made of white marble, but the tomb is set against an awesome backdrop of the river and it is this background that works its magic of colors, and through the reflection of these colors transforms the view of the Taj. The colors change at different hours of the day and during different seasons. Like a jewel, the Taj sparkles in moonlight when the semi-precious stones inlaid into the white marble on the main mausoleum catch the glow of the moon. The Taj is pinkish in the morning, milky white in the evening and golden when the moon shines. These changes, they say, depict the different moods of a woman.

To people the world over, the Taj Mahal, mausoleum of Mughal Emperor shah Jana’s chief wife, Mumtaz Mahal, is synonymous with India. Its curving, gently swelling dome and the square base upon which it rests so lightly is a familiar image from hundreds of brochures and travel books. The Taj is undoubtedly one of the most spectacular buildings of the world. Renowned for its architectural magnificence and aesthetic beauty, it counts among man’s proudest creations and is invariably included in the list of the world’s foremost wonders. As a tomb, it has no match upon earth, for mortal remains have never been housed in greater grandeur.

It has been said of the Mughals that they designed like giants and finished like jewelers, a fact amply brought out in the Taj Mahal. The wife of a British officer, Colonel Slleman, while writing home, described it thus: “I cannot tell what I think. I do not know how to criticize such a building but I can tell what I fee. I would die tomorrow to have such another over me.”

The poet Rabindranath Tagore has perhaps said it best of all: “You know Shah Jahan, life and youth, wealth and glory, they all drift away in the current of time. You strove therefore, to perpetuate only the sorrow of your heart. Let the splendor of diamond, pearl and ruby vanish. Only let this one teardrop, this Taj Mahal, glisten spotlessly bright on the cheek of time, forever and ever.””
[Puzzle booklet]